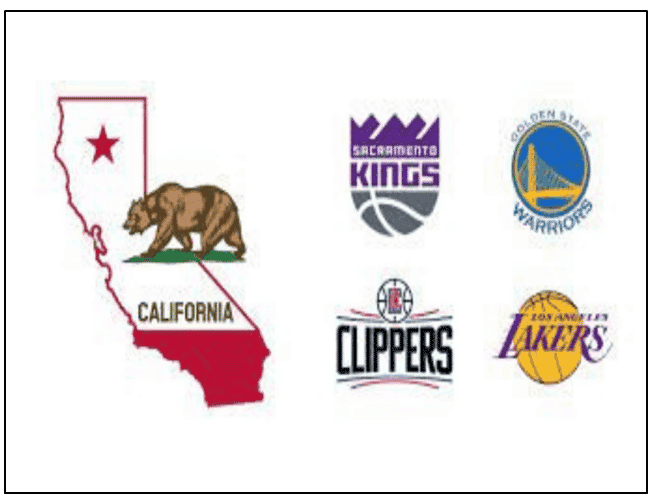 According to oddsmakers at Bovada, the favored state for the winning team of the 2022 NBA Finals is California. They have +150 odds, followed by any other state (+180), New York (+230), Florida (+2200) and Texas (+2500). This is for Western Conference teams, such as the Los Angeles Lakers, Los Angeles Clippers, Golden State Warriors and Sacramento Kings. Of course, based on the available odds, the Lakers and Warriors have the highest odds of winning next season’s championship for Californian teams.

All four contenders play in the Pacific Division. The winner of this division will have the best odds (+150) of winning the 2022 Finals. Regarding the “any other state” odds, this includes Wisconsin for the Milwaukee Bucks, Arizona for the Phoenix Suns, Pennsylvania for the Philadelphia 76ers, Utah for the Utah Jazz and other unlisted states. It appears that oddsmakers are not expecting the Bucks to repeat as champions. Though, both the Lakers and Warriors are now better competitors on paper.

On the same day, Los Angeles also signed Dwight Howard and Carmelo Anthony. Statistically, Howard had the best season of his career shooting-wise during the Lakers’ 2019-20 championship season. Anthony signed a one-year deal with Los Angeles. The 10-time All-Star has to have something left in the tank.

Plus, Rajon Rondo will sign with the Lakers on Tuesday, and the front office are also interested in pursuing DeAndre Jordan from the Brooklyn Nets. Jordan is expected to reach a buyout with the Nets soon. Needless to say, the roster is completely different. This is why the Lakers have the second-best odds (+350) of winning their 18th championship in this upcoming season.

Moreover, the Warriors have made various offseason moves as well. On August 3, 2021, Stephen Curry signed a four-year, $215 million contract extension. He is now signed through a 17th season with the organization. Three days later, the team signed Andre Iguodala to a one-year deal. The 37-year-old was a key contributor during the Warriors’ dynasty. On the same day, Golden State also signed free agents Nemanja Bjelica and Otto Porter Jr. During the 2021 NBA Draft, the team drafted Jonathan Kuminga seventh overall.

The 18-year-old Congolese forward played one season for the G League’s Ignite prior to the draft. Additionally, Moses Moody was selected 14th overall. Right now, the big question for the Warriors is whether or not Klay Thompson can remain healthy this season. During Game 6 of the 2019 NBA Finals against the Toronto Raptors, he tore his ACL.

Fast forward to the 2020-21 season, Thompson suffered another season-ending ACL tear on November 19, 2020. So, the six-foot-six shooting guard has not played a full season since the Warriors’ 2018-19 championship season. In that season, he averaged 21,5 points, 3.8 rebounds and 2.4 assists per game in 78 games played.

As of now, the Lakers and Warriors remain as the top two competitors in the state of California. Referencing Bovada’s futures odds, the Warriors have +1000 odds of winning the 2022 NBA Finals next season, ranking fourth in the league.

Basketball News - April 25, 2021
0
The New York Knicks are currently on their longest winning streak since 2014. Along the way, they’ve defeated several teams with whom they’re competing...

Montrezl Harrell ‘is providing that outstanding spark for the Lakers’, says...

Dwane Casey on Andre Drummond: “I think he’ll be a big...