Did you know that the next time there’s a first-time men’s basketball national champion from a state that has never produced the winner of the NCAA tournament, there will be 25 states that have had one of its schools win a national title and 25 that haven’t?

There’s a dot for each city that is home to at least one school that has won a national title. Larger dots represent more national championships. 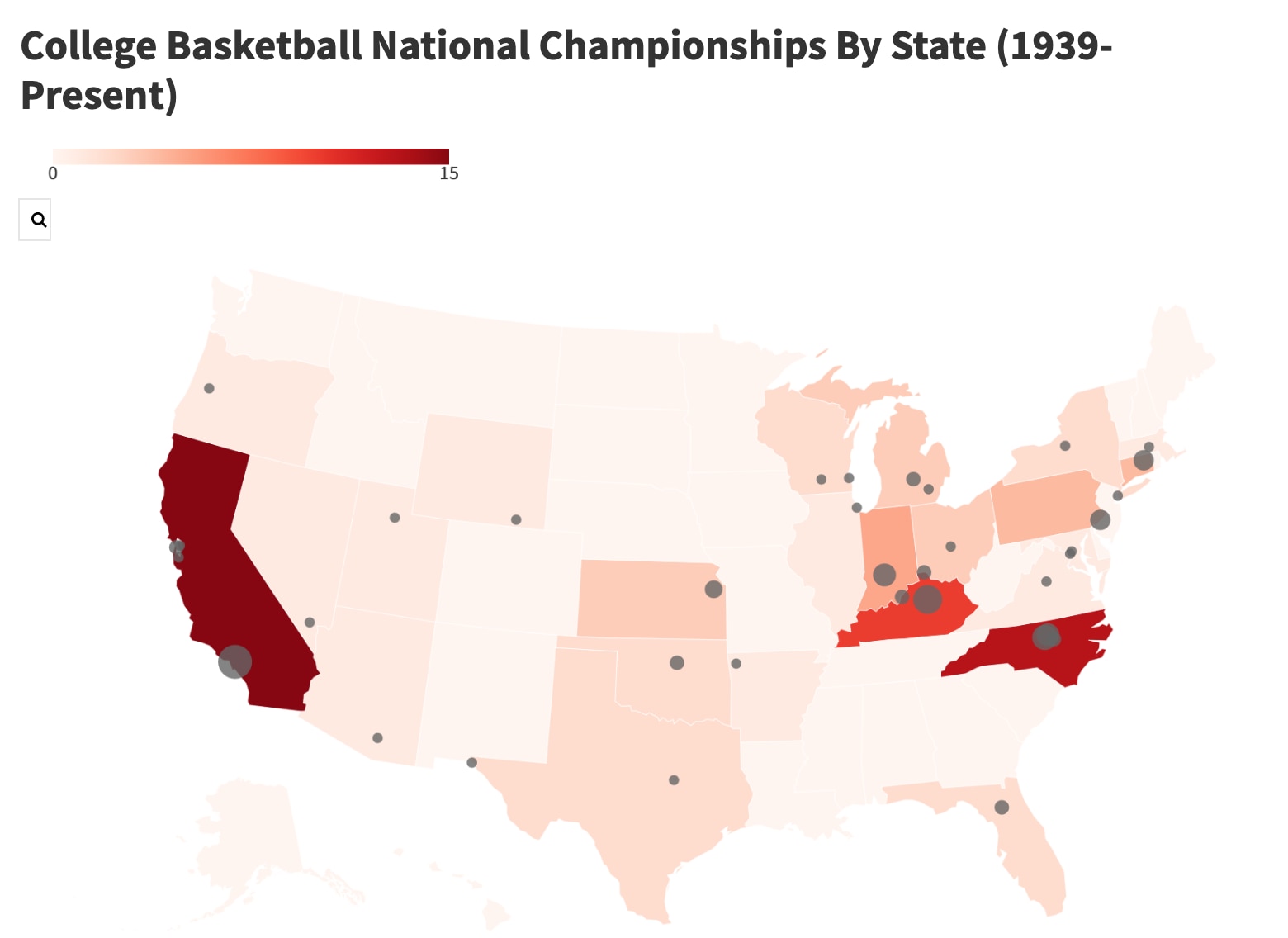 Here are the states with the five highest national championship totals.

It’s no surprise that California is atop this list given the state’s population, basketball talent, number of Division I universities and the fact that it was home to the greatest Division I men’s basketball dynasty ever at UCLA.

San Francisco won back-to-back titles in 1955 and ’56, California won its first and only title in ’59, then the Bruins started their unprecedented run five years after that.

In total, four schools in California have won a title, starting with Stanford in 1942.

Thanks to The Triangle — Chapel Hill, Durham and Raleigh, and each city’s ACC institution — the state of North Carolina ranks second among the 50 states in terms of men’s basketball national championships.

The Tar Heels have won six titles, the Blue Devils have five and the Wolfpack have two.

Just look at the overlap of the dots that represent Duke, North Carolina and North Carolina State on the map above and you’ll realize that this state, especially The Triangle region, is home to as much concentrated, high-level men’s basketball talent as anywhere in the country.

Can you name the two decades in which a school from the state of Kentucky hasn’t had a school win the men’s basketball national championship, among full decades since the NCAA tournament started?

We mentioned the high concentration of national championships in the Chapel Hill-Durham-Raleigh triangle, and similarly, the greater tri-state area of southwest Ohio, southeast Indiana and Northern Kentucky offers a host of college basketball success, between Cincinnati, Indiana, Louisville and Kentucky.

DEJA VU?: The most popular names in college basketball in 2020 sound a lot like the 1990s

Other schools in Indiana have come close — Butler had national runner-up finishes in 2010 and 2011, Notre Dame has lost in the regional final six times (and has a 1978 Final Four appearance), and Purdue lost in the national championship in 1969 and in the Final Four in 1980 — but none has ultimately cut down the nets at the end of the season.

Indiana is still looking for its first post-Bob Knight national title, having last won a championship in 1987.

We mentioned what Indiana University’s championship success means to the Hoosier State. UConn has a similar status in the Nutmeg State. The Huskies have won all four of the state’s national titles — and their two most recent championships (2011 and 2014) were two of the more improbable championship runs in recent college basketball history.

UConn rattled off 11 postseason wins in a row to win the 2011 national title after it lost four of its last five regular season games. Three years later, the Huskies won the national championship as a No. 7 seed.

UConn won its first two titles as a No. 1 seed and No. 2 seed, respectively, so it’s not as if the program has been a Cinderella story every time it has cut down the nets. But for a 20-year span, the Huskies had as much goodwill in March as any program in the country.

RELATED: A complete breakdown of all four of UConn’s men’s basketball titles

Just five years ago, the state of Pennsylvania had half as many men’s basketball national championships as it does today.

That’s because Villanova has elevated itself from a competitive Big East program with a storybook run to a national title as a No. 8 seed in 1985 to a modern-day power, which won two national titles in three years in the last decade.

Many college basketball fans may not realize (or have forgotten) that fellow Big 5 school La Salle won the state’s first national championship in 1954.

Here’s the complete list of every state, plus D.C., that has won at least one men’s basketball national championship.