There aren’t many better ways to spend a Friday night than watching basketball games and getting rich off of them.

At DraftKings, that’s exactly the opportunity you have with their daily fantasy prizes. Today, NBA fans can enter the $575 thousand Friday Fall Festival game. Just be sure to enter before 7 p.m. ET to make sure your lineup is eligible.

Just to get you up to speed, here are the stipulations for tonight’s contest.

– Simply select a team of 8 players to join

– Must enter by tonight at 7 PM EST

Like I said, what’s better than sitting down watching basketball while also getting rich.

In the spirit of competition, I’ve decided to field a lineup (minus a few players, because I can’t give away all of my secrets) and I’m challenging you to enter to see if you can beat me. 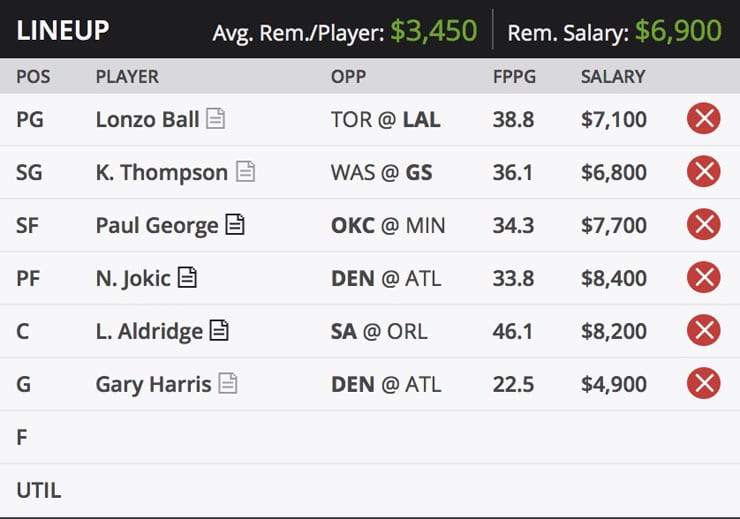 Considering this is a slam dunk lineup, I’ll let you in on my thought process for a pick-by-pick breakdown:

You have to have a Big Baller Mentality to get money, right?

Lonzo is off to a scorching hot start to his NBA career, averaging a near triple-double. That’s points galore on the DraftKings system.

Despite struggling with his shot so far to start the year, Lonzo continues to make plays and put up gaudy assist and rebound numbers. Regardless of who is checking Lonzo tonight for the Toronto Raptors, expect him to orchestrate another impressive performing Lakers offense on their home court.

To start this 2017-18 season, Klay Thompson has been on absolute fire.

Averaging 21.2 points per game to go along with 4.8 rebounds and 1.2 blocks, Thompson is clearly feeling himself so far this year. Not to mention he’s currently connecting on 47.6 percent of his shots from downtown. At the moment, the rim looks 10 feet wide to this Splash Bro.

But what makes Thompson such an intriguing play tonight is that amid this current three-game homestand, the shooting guard is donating $1,000 for every point he scores to California wildfire relief. That alone makes Thompson that much more willing to let it fly.

Considering the one-for-all all-for-one nature the Warriors display at all times, I don’t think his teammates will mind feeding the rock to Thompson knowing his buckets are going to a cause even more than their win total.

Four games into the new Big Three experiment in Oklahoma City, Paul George has yet to really find his way.

His averages are down across the board, and his shooting percentages don’t resemble that of a four-time All-Star.

But tonight, that changes for George. Going up against the Minnesota Timberwolves for the second in three games, George gets another chance going at the likes of Andrew Wiggins and Jimmy Butler.

George will get his shots; he took 20 in the last meeting between these two teams, and I wouldn’t expect a player of his caliber to continue his slump much longer.

The Joker is one of the NBA’s true unicorns and he can fill up a box score (and your fantasy point total) in the blink of an eye.

His impact on every level of the court is no secret, and with the Atlanta Hawks and their putrid lineup acting as his opponents for the night, his high price tag is warranted.

No Hawks big will be able to keep up with Jokic on the block or follow him out to the perimeter. After starting the season slow by not reaching double-figures in the scoring column for his first two games, Jokic registered 29 and 18 points in his last two contests, respectively.

With a porous defense to prey on, The Joker will have your DraftKings lineup getting the last laugh.

While Kawhi Leonard has been on the bench to start the season for the Spurs, the LaMarcus Aldridge Renaissance has been in full swing.

Posting numbers that resemble his days in Portland, Aldridge has been on an absolute tear and currently holds a 46.1 fantasy point per game average.

Already possessing two double-doubles, a 30-point game, and reaching the 20-point plateau four times, Aldridge will assuredly continue his hot-streak tonight against an Orlando Magic team despite their 3-1 record, is giving up 112.1 points per game to their opponents.

Aldridge looks the part tonight as your DraftKings lineup anchor.

Using the same logic as with the Jokic selection, Gary Harris looks to be in the position tonight to take advantage of a weak opponent.

In the early goings of this season, Harris hasn’t quite taken that leap some were projecting. But the year is early, and Harris is still hitting his shots at a more than efficient clip.

With Harris’ shooting ability from beyond the arc (currently 47.6 percent) and the lack of elite wing defenders Atlanta possesses, the 23-year-old two-guard is a smart play tonight.

Not to mention, with the double play of Harris and Jokic, you can be rooting a little extra for the Hawks’ defense to collapse on the big man right before he makes a sweet dish to his shooting guard on the perimeter.

Now, like I said, I can’t give away all of my secrets so you’ll have to piece together your NBA knowledge to fill out the remaining two spots on your roster with some bargain players.

Since this is all in good fun, I want to know if you beat me. Tweet me your lineups @DennisChambers_ and we’ll see who is the true DraftKings champion.

If you are a DraftKings beginner, try the Beginner Contest:
– FREE with your first deposit of at least $5
– $300 in prizes
– Top 25 places win money guaranteed
– Only beginners are allowed to play in this contest
– Must sign up by 7 PM EST tonight