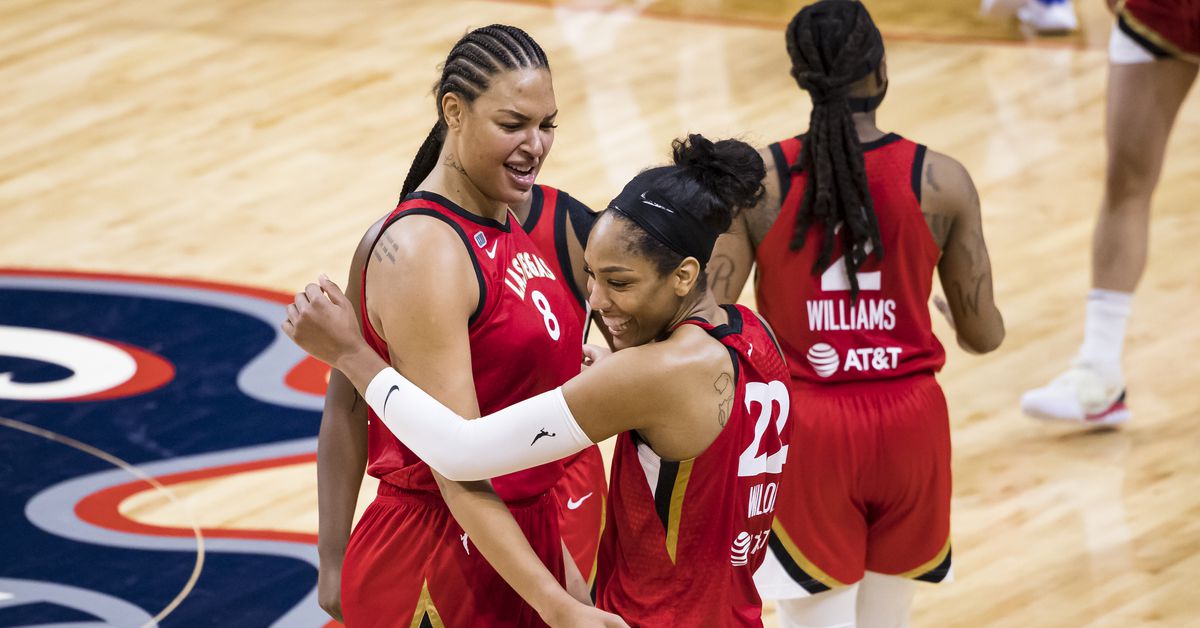 The Las Vegas Aces (7-3) survived a late surge by the Washington Mystics (2-5) to win 96-93 on Saturday at the Entertainment and Sports Arena in Washington, D.C. Liz Cambage led the Aces with 24 points and 11 rebounds, her third double-double of the season.

Despite shooting 3-of-14 from the floor, A’ja Wilson finished with 15 points and 15 rebounds, thanks to a 9-of-9 outing at the free throw line. Riquna Williams scored a season-high 20 points while Jackie Young contributed her third 20-point game of the season, finishing with 22.

The Aces built a lead as large 13 points, leading 90-77 with around four minutes to play in the fourth quarter, but a 13-0 run by the Mystics tied the game with a one minute left in the game. An A’ja Wilson putback with 46 seconds left regained the lead for the Aces and they would see out the game as Wilson stole the ball on an inbound play with 3.1 seconds left on the clock.

It truly was a tale of two halves as the Mystics shot 55 percent in the first half and 28 percent in the second half. Myisha Hines-Allen led all scorers with 32 points and 13 rebounds. Additionally, Ariel Atkins scored a season-high 29 points.

The Sparks led throughout the first half, opening up an 11-point lead twice, and led by nine at the break. The Sky outscored the Sparks 18-9 in the third quarter to tie the game entering the fourth. A Kahleah Copper basket with just over five minutes put the Sky up 57-53, their largest lead of the game. Copper finished as the Sky’s scoring leader with 15 points. The Sparks would close the quarter on a 15-6 scoring run. The Sky shot 1-of-6 to close out the quarter.

For the Sparks, Amanda Zahui B contributed 13 points, 10 rebounds, and four blocks. Te’a Cooper recorded her third-straight game with double-digit points with 13. The Sparks’ defensive performance was impressive as the Sparks held the Sky to 33.9 percent shooting and forced 18 turnovers.

The Connecticut Sun improved to 5-0 at home while the New York Liberty suffered their third-straight loss and their second defeat by 20 or more points this season. Jonquel Jones led all scorers with a season-high 31 points and added 13 rebounds, her seventh double-double of the season. Rebecca Allen was the only double-figure scorer for the Liberty with 14 points off the bench.

The Sun were able to generate 16 more shots and make seven more than the Liberty thanks to 14 offensive rebounds. The Sun scored 22 second chance points to just two for the Liberty while also generating 24 points off of 15 forced turnovers.

The Liberty were able to overcome an early deficit and gain a four point lead in the middle of the second quarter but went into the half trailing by six points, 43-37. The Sun held the Liberty to 27 points in the second half and 33 percent shooting.

Basketball News - May 3, 2021
0
Photo: Andrew D. Bernstein/NBAE via Getty Images The Los Angeles Lakers have lost six out of their last seven games. Their most recent defeat...

NBA Daily: A Bright Future is Building in Oklahoma City |...

How First Four teams do in the NCAA tournament

NBA veterans are offseason targets for LeBron James and Lakers

Luka Doncic: “You can’t compare me to Larry Bird”

Enough disappearing acts from Ben Simmons in the playoffs