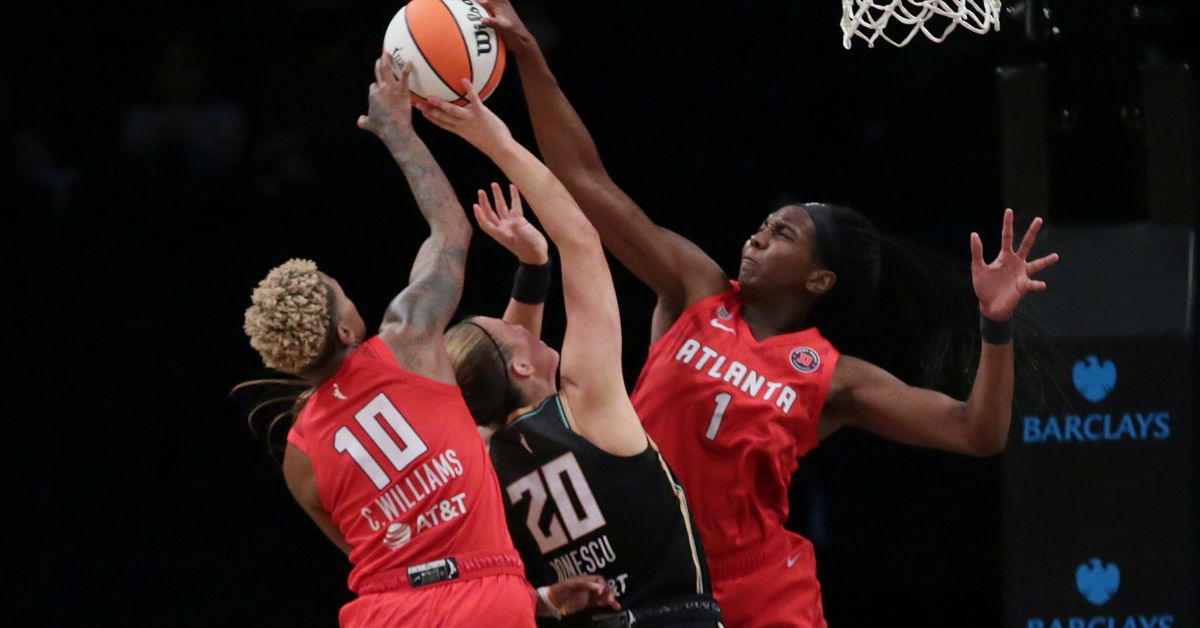 Both the Atlanta Dream (4-2) and Minnesota Lynx (1-4) are coming off exhilarating victories.

Last Saturday, Courtney Williams capped off a spectacular 31-point, 12-rebound and seven-assist performance with a cold-blooded, game-winning 3-pointer, giving the Dream the overtime win in Brooklyn over the New York Liberty. On Sunday, the Lynx also got an overtime win of their own, with new addition Layshia Clarendon sparking the comeback against the Connecticut Sun.

Which team can carry their victorious vibes into their Friday night meeting in Minnesota?

Atlanta will be without Chennedy Carter, who suffered a hyperextended elbow last Saturday. Luckily, the Dream have a deep guard rotation. Interim head coach Mike Petersen can have Odyssey Sims step into the starting lineup and Aari McDonald play more minutes off the bench without sacrificing his preferred strategies and style. While neither Sims nor McDonald is the offensive manipulator that Carter is, Sims possesses bucket-getting veteran savvy and the rookie McDonald has proven unafraid to fire away. On the defensive end, both bring the requisite intensity.

Whether Tiffany Hayes, Courtney Williams, Sims or McDonald are on the floor, Atlanta’s aggressive trapping defense could cause trouble for Minnesota’s guards, exploiting Crystal Dangerfield’s lack of size and Layshia Clarendon’s lack of chemistry with still-new teammates.

On Minnesota’s side of things, Sylvia Fowles could be a problem for Atlanta. Although Elizabeth Williams provides sturdy defense and Monique Billings always overflows with energy, a dialed-in Fowles has the size advantage necessary do damage around the basket. Defensively, her presence can reduce the effectiveness of Tiffany Hayes and company’s drives to the hoop.

In Friday night’s second contest, the league-leading Seattle Storm (6-1) will have the opportunity to win their sixth-straight game when they take on the Dallas Wings (2-4). Earlier in the season, the Storm won an overtime thriller in Dallas. Each squad’s dominating scoring duo — Breanna Stewart and Jewel Loyd for the Storm and Arike Ogunbowale and Marina Mabrey for the Wings — did their thing. Ogunbowale and Mabrey combined for 54 points, but Stewart and Loyd bettered them, together tallying 61 points. As these are the two highest-scoring teams in the WNBA, a fun, late-night barn burner could be in store!

Where: Target Center in Minneapolis, MN

Key to the matchup: Minnesota, at least theoretically, has the shooters to punish Atlanta for their blitzing defense. Thus far, the Lynx sharpshooters have not found their 3-point strokes. Kayla McBride is making up for lost time in Las Vegas, firing 5.4 trey attempts per game. But she currently is converting them at a career-worst rate of 29.6 percent. After shooting 45.7 percent from deep last season, Bridget Carleton is hitting only 25 percent of her treys. In only two games, Napheesa Collier has more than doubled her 3-point attempt rate, taking 4.5 per game. However, her percentage also is subpar at 33.3 percent. Nevertheless, if the three-ball tide begins to turn for the Lynx, they could rain points on the Dream’s defense.

Where: Angel of the Winds Arena in Everett, WA

Key to the matchup: Dallas second-year guard Ty Harris is coming off her best game of the season, and maybe her career. In 22 minutes off the bench, Harris scored a career-high 18 points in the Wings’ win over the Sparks, powered by a 4-of-6 performance from 3-point range. She finished the game a team-high plus-nine. While overshadowed by the “Marike” show, Harris has incrementally improved across the board so far this season. She is averaging nearly 10 points, almost four assists and more than a steal in just under 25 minutes per game. As head coach Vickie Johnson establishes her rotation upon the returns of Allisha Gray and Satou Sabally, it will be interesting where Harris fits in and how her all-around skillset — sturdy ball handling, strong shooting and solid defense — can be maximized.

What does Didi Louzada bring to the organization?

5 players to trade into the NBA draft for