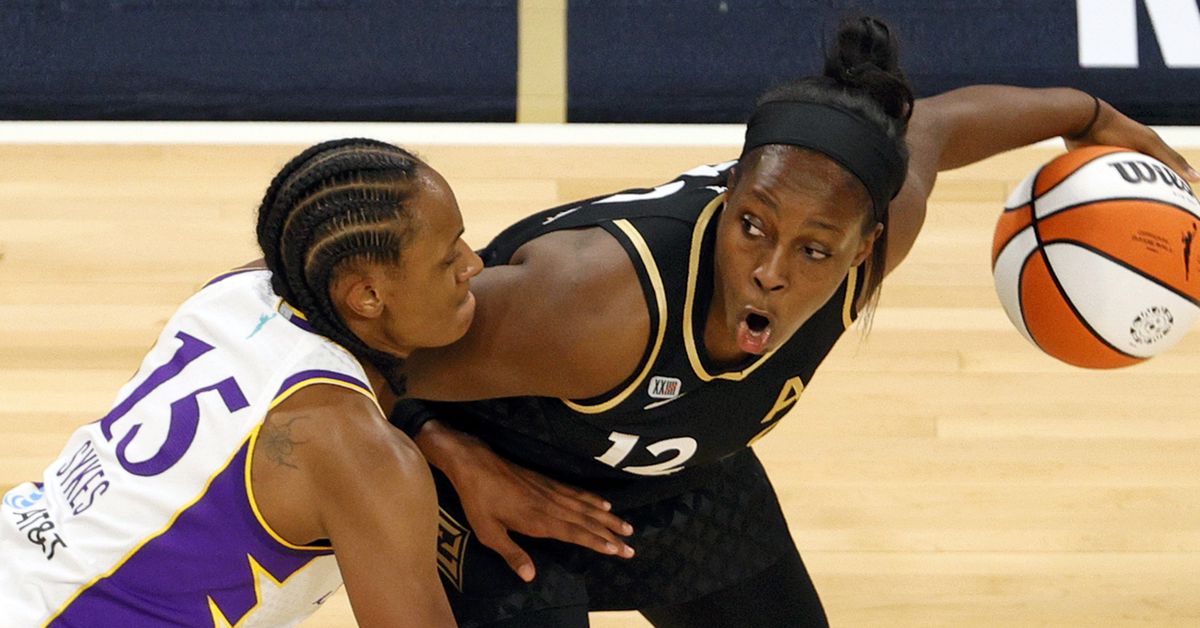 Kristi Toliver drilled a 3-pointer 25 seconds in and her Los Angeles Sparks came out with a lot of energy on both sides of the ball to lead 15-10 about halfway through the first quarter on Friday night at Michelob ULTRA Arena in Las Vegas.

However, when the clock hit triple zeroes, that seemed like ages ago and as if it was a part of a different game. The Las Vegas Aces had dismantled the Sparks 97-69 in their home opener thanks in large part to a 31-16 second quarter and 17 or more points from Chelsea Gray (18), Dearica Hamby (17), A’ja Wilson (17) and Jackie Young (17).

“I think overall we got a really good, solid effort across the board,” said Aces coach Bill Laimbeer. “Our whole team is still a working process, we’re learning about each other. We’re making good progress, I will say that, more so than I thought (we would be) to this point. But overall, you know, OK. It’s only game three, but I think our potential is showing forth.”

“So happy!” Gray said of the balanced scoring. “I wish we didn’t turn over the ball so much in the second half and a lot of that was led by myself. And we probably would have done a lot better in that category even though we did have balanced scoring and everybody was sharing the ball. And that’s what we’re going to get when we have that mentality offensively.”

The Aces (2-1) were able to win without Kelsey Plum, who had USA Basketball commitments. Young stepped up in Plum’s absence. She is a capable scorer, but is not expected to be a go-to scorer like she’s been the last two games for Vegas. She scored a career- and game-high 21 points on Tuesday and then made a living off taking the same short jumper in the lane on Friday and either making it or getting fouled. She was 5-of-8 from the floor and 7-of-9 from the stripe.

“It feels good,” Young said of contributing at this level. “But I’m just trying to do whatever I can to help my team win. Whether that’s scoring or getting assists, rebounds, whatever that is. I’m just trying to come in and just be aggressive. That’s the biggest thing for me.”

“Having Liz out there with A’ja, man they command so much attention from the defense,” Laimbeer said. “It opens the floor up so much for someone like Jackie to drive. … Jackie’s really good at her physical strength and getting in that lane and just raising on people. That’s what I told her on the first day she walked in the building as a first-round draft pick.

“Can I say, like, I’m pushing for Jackie Young to be most-improved player,” Wilson said. “She’s opening up, she’s coming out of her shell, she’s just dominating her defender pretty much every single game. I’m not surprised by that at all. I knew it was gonna come around, it was just a matter of time.”

Nneka Ogwumike had 19 points and five rebounds in defeat as the Sparks fell to 0-2.

The Dream picked up their first win of the season after losing fairly close ones to undefeated Connecticut and undefeated Chicago and it was thanks to a forced shot clock violation with 8.8 seconds left.

Indiana’s Kelsey Mitchell (19 points) knocked down a 3-pointer that cut the Fever’s deficit to three with 1:05 to play. Then, after two Dream misses, Jessica Breland (15 points, 16 rebounds) picked up a defensive rebound that gave Indiana the ball back. But Atlanta forced the Fever to call a timeout to avoid a jump ball with 16.6 ticks remaining and then forced K. Mitchell to take a deep three that hit all backboard and missed the rim with 8.8 to go.

From there, a Chennedy Carter free throw iced the game.

The game was tied at 68 with 4:18 to play and Indiana had led by three at the 6:26 mark after which Atlanta went on a 13-2 run that featured six points from Williams and a final five points from Crystal Bradford.

The Dream led by seven at the break but it was tied entering the fourth.

J. Jones added 11 rebounds and four assists and Bonner had seven boards and five helpers. Hiedeman started the first two games of the season filling in for J. Thomas and started again on Friday filling in for Briann January, who was out with an ankle sprain.

Skylar Diggins-Smith recorded 20 points for the Mercury and Diana Taurasi had 13 to go along with four assists. The Sun held Brittney Griner to just six points.

Sixers reportedly interested in adding a starting caliber guard ahead of...

LaMarcus Aldridge is cleared to play again, favored to unretire