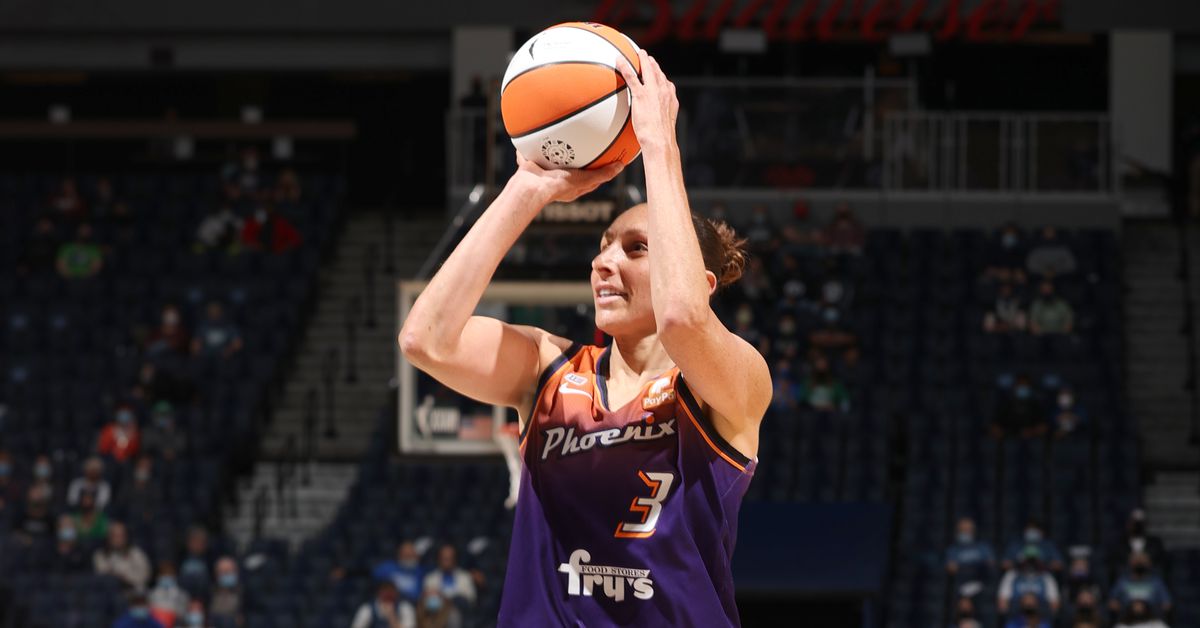 Just a couple hours after Sabrina Ionescu made a game-winning 3-pointer near the buzzer, the excitement continued as Diana Taurasi buried a nothing-but-net three from well beyond the arc with Kayla McBride’s hand in her face at 1.1 seconds remaining to give the Phoenix Mercury (1-0) a 77-75 victory over the Minnesota Lynx (0-1) on Friday night at Target Center in Minneapolis.

The play started with Brianna Turner (13 points, 10 rebounds) knocking the ball away from Crystal Dangerfield on the other end and Brittney Griner (17 points, 12 rebounds) picking it up and throwing it up the court to Taurasi (14 points, eight rebounds, five assists).

“They really did play great the whole game, I thought BG ad Breezy the way they rebounded, how tough they were on the interior,” Taurasi said. “We know how good Sylvia (Fowles) is and (Damiris) Dantas. (Minnesota is) a really physical team and I think (Griner and Turner) really set the tone early.

I mean Breezy made a great stop. … Sandy (Brondello) said if we get a stop just go right into one of our little schemes that we like to run at the end of quarters and the end of games. I got a pretty good look and it went in.”

The Lynx were unable to get a shot off after Taurasi’s make.

Phoenix, which was led by Skylar Diggins-Smith’s 18 points, led by four after one and by nine at the break before Minnesota was able to cut it to two entering the fourth.

Aerial Powers, who averaged by far a career-best 16.3 points through six games in last year’s wubble before suffering an injury, scored a team-high 18 in her first game in a Lynx uniform. McBride, also a new addition for Minnesota, added 17, as did the reigning Rookie of the Year in Dangerfield. Fowles notched 11 points and 11 boards.

The Wings came back from being down seven after one to win the second, third and fourth by 10, seven and 13, respectively.

2021 No. 1 draft pick Charli Collier added 11 points and 10 boards in what was a balanced scoring effort for Dallas. Marina Mabrey also had 11 points, Isabelle Harrison had 10 and nine boards and Kayla Thornton had seven and a game-high 11 boards.

The Wings outrebounded the Sparks 45-25.

“For me it’s normal,” Dallas head coach Vickie Johnson said of Collier’s contribution to such a dominant rebounding effort. “That was her goal, a double-double. Period. She did it in preseason. She didn’t box out very well, she still had 10 boards.

We have high expectations of Charli. She’s working hard on both sides of the basketball and she’s understanding the speed of the game. She understands the WNBA. She’s buying in and she’s up for the challenge.”

“As team it was an amazing effort,” Collier said. “Coach before the game, earlier in the week, she sat down and she told me my expectations. Obviously I’m gonna have to be a rebounding machine and contribute to the team as much as I can. Points will come, but the rebounding is what I pride myself on.

It was expected out of me. Coach, she told me I have a role on this team and I have to do just that and so I did my job tonight. I’ll have to continue to do that throughout the season.”

Nneka Ogwumike had 18 points and eight rebounds in defeat.

The Sun led by five after one, 10 at halftime and by 13 entering the fourth. Preseason sleeper MVP pick Jonquel Jones scored 26 points and had eight rebounds and the dynamic duo of her and DeWanna Bonner (21 points, seven boards, five assists, three blocks) played well together. Natisha Hiedeman also impressed with nine points and eight rebounds.

Courtney Williams and Odyssey Sims both had 14 points for Atlanta, with C. Williams dishing out four assists.

IT’S BEEN 582 DAYS SINCE JJ WAS ON THE FLOOR IN A SUN UNIFORM.

She just dropped 16 points in the first quarter. #BornForThis

Basketball News - April 13, 2021
0
“They’ve got a bright future!” Has there ever been a more vague statement in the NBA? Not to mention, something pretty cliche on top...

Paul Pierce has a message for the haters

Montrezl Harrell says his ‘beef is with anybody who doesn’t have...