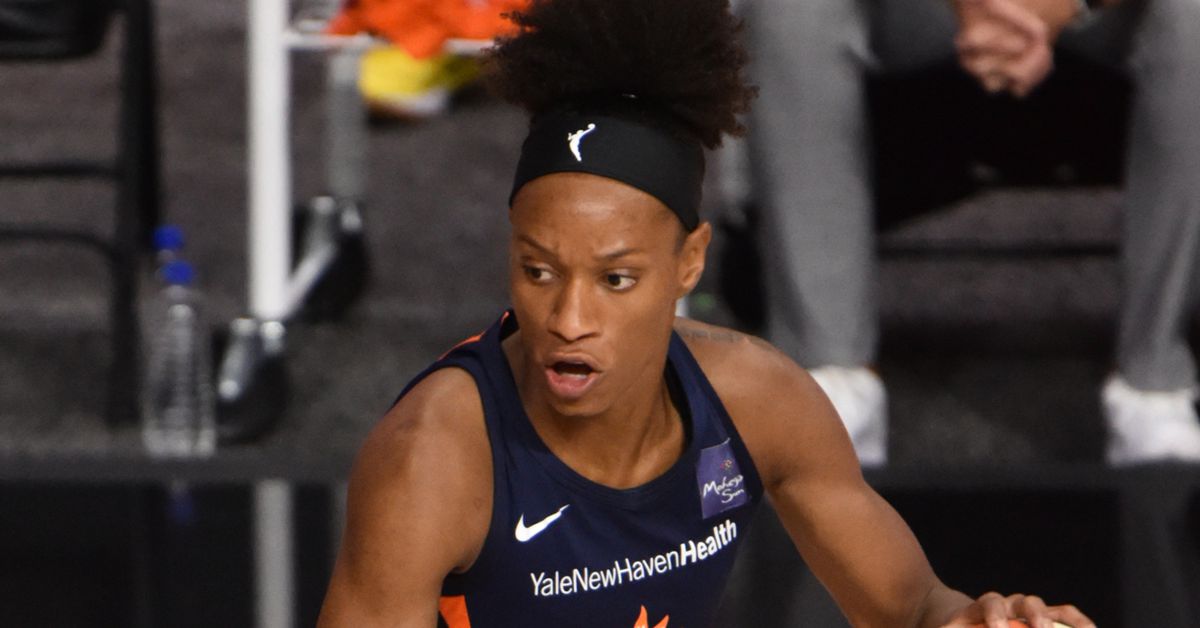 The Connecticut Sun are one of many WNBA teams that feels like it just needs to get all the puzzle pieces together at the right time. The Las Vegas Aces and Washington Mystics missed out on that opportunity last year, for example, but will both have their top two stars together this season. The Sun, on the other hand, missed out on having their big three together in 2020 and will miss out on it again in 2021 with Alyssa Thomas out for the season with a torn Achilles. Jonquel Jones and DeWanna Bonner will get to play together for the first time, though, and we’ll see if they can give an always-scrappy Connecticut team enough talent to be in the middle of the pack even if it can’t be near the top like it would be with Thomas.

Potential promise of the Sun

J. Jones and Bonner could be dangerous together. J. Jones is a better back-to-the-basket player and is more of a forward-center, while Bonner is more of a forward-guard, so they should be able to set up distinctly different roles in the offense, though there will be some similarities between them. But who wouldn’t want two players who are both 6-foot-4 or taller, can shoot the three and create their own offense off the dribble as long as they’re not going to step on each other’s toes too much?

Brionna Jones is on the rise

B. Jones improved her career-best scoring average by 7.7 points to 11.2 and her career-best rebounding average by 3.4 to 5.6 in 2020. Her career was at a pivotal point in its fourth season and she took the star track — now she just has to continue down that path. She is a great traditional big who can complement the stretch abilities of J. Jones and Bonner. Inside touch is her true strength — her field goal percentage was 60.5 in 2020, good for second in the league. At Maryland she scored 1,928 points and shot 65 percent from the field for her career, including a nation-leading 69 percent as a senior. B. Jones is going to be a great third-best player for the Sun if she continues to improve.

Potential problems for the Sun

Both of the Sun’s potential problems have potential solutions, but depth could be an issue.

J. Jones, Bonner, B. Jones, Jasmine Thomas and Briann January form a solid starting lineup for Connecticut. Thomas and January are both reliable veteran guards. However, after that starting five you have Kaila Charles as the team’s next-best player under contract. Compared to other sixth women around the league, she’s not near the top of the list, although she did have a solid season for a rookie with 5.4 points per game in 17.9 minutes per game. Natasha Hiedeman, who is on a training camp contract, is right there with Charles and they both have some potential.

But when you look at the bottom two teams in Swish Appeal’s power rankings, the No. 12 Indiana Fever have Tiffany Mitchell and Jessica Breland — both more proven than Charles and Hiedeman. And the No. 11 Dallas Wings have proven veteran Kayla Thornton and also Marina Mabrey (10 points per game in 2020) in addition to four Top 13 picks in the 2021 draft: Charli Collier, Awak Kuier, Chelsea Dungee and Dana Evans.

The potential solutions are Charles and Hiedeman taking big leaps or DiJonai Carrington having an impact right away. Carrington was a steal at No. 20 in this year’s draft and don’t forget that Mompremier was also expected to be a first-round talent in 2020, though she too went at No. 20.

The Sun were the second-to-worst 3-point shooting team in the league last year at 31.1 percent, but had a unique style of play with Alyssa Thomas as the focal point that was effective for them. Thomas doesn’t take threes at all, but is nearly unstoppable in transition and can make things happen with passes or scores by backing down in the post, too. With her out for the season, the Sun will be without their point-forward and will need to adjust their offense. It may look more traditional this year and may require the team to take more threes. If that is the case, they will need better 3-point shooters.

The good news is that the Sun will be getting Jonquel Jones back and another possible solution could be giving Aleah Goodman of Oregon State a roster spot. Goodman had the second-best 3-point shooting percentage in the nation in 2020-21 at 49 percent. She was the 30th pick in the 2021 draft and third-round picks usually have trouble making rosters, but she fills a need for the Sun.

The Sun should be right on the border of making the playoffs. There’s a clear Top 6 in the league: Las Vegas, Chicago, Minnesota, Washington, Seattle and Phoenix. Those first four are the best teams and don’t count Seattle out with the star power of a single player in Breanna Stewart. Meanwhile, Phoenix is right up there with the other five talent-wise but has underachieved in recent years so it’s hard to trust it. The Sun could fall into the seven spot as a best-case scenario, but will be competing with the Sparks and three lottery teams that have all improved quite a bit. New York got Natasha Howard and Betnijah Laney, Atlanta got Odyssey Sims, Cheyenne Parker, Tianna Hawkins, Shatori Walker Kimbrough and No. 3 pick Aari McDonald (plus Tiffany Hayes back from an opt out) and the Wings had an incredibly successful draft.

We’ll see if the Sun’s intangibles and recent playoff experience will give them an edge over those lottery teams and a Sparks team whose number they’ve had in recent years.

What winning March Madness brackets have in common

Jimmy Butler has hilarious celebration after and-1 finish

Erik Spoelstra says Jimmy Butler would be in MVP convo in...