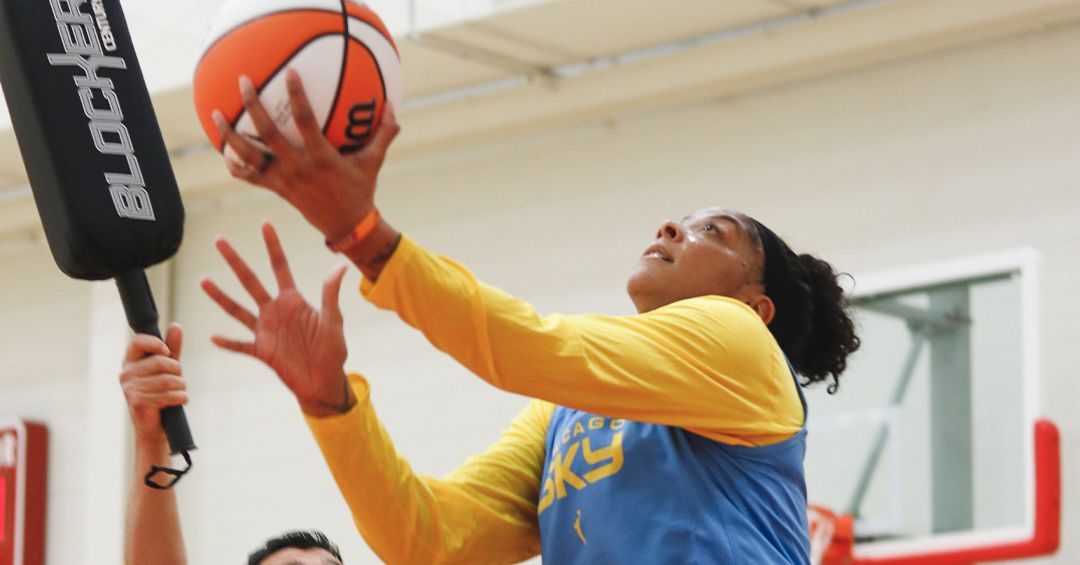 Entering the 2021 WNBA season, the Chicago Sky are in a position they may not be used to: legitimate championship contention.

The Sky, who sent shockwaves through women’s basketball this past offseason by signing WNBA legend Candace Parker, are widely considered throughout the community as one of a few teams that could win it all in 2021. Chicago ranked second in Swish Appeal’s preseason power rankings, and the hype certainly seems justified after head coach and general manager James Wade made upgrades across the board to a 2020 team that had potential but petered out down the stretch.

“We started off really well last year and didn’t finish very well,” Wade told the Chicago Sun-Times during training camp. Midseason injuries took their toll on the 2020 Sky, and the team’s lack of depth was exposed in a first-round playoff loss to the Connecticut Sun.

That depth has been shored up considerably. Beyond the addition of Parker, Wade drafted 19-year old Australian point guard Shyla Heal as mainstay Courtney Vandersloot’s backup and brought 2019 fan favorite Astou Ndour back to Chicago after the slender center spent much of last season on the bench in Dallas. Though the Sky were unable to retain the much-improved Cheyenne Parker, who signed with the Atlanta Dream for a salary Chicago simply couldn’t match, they are unquestionably deeper — and more experienced — than they were last year.

With these new pieces in the fold, the Sky have a better shot at a WNBA title than ever before. They may not be considered as the league’s primary favorites, but anything lower than a top-four finish would likely be a disappointment. Here are two reasons the Sky could claim the 2021 WNBA championship, along with two reasons why they could come up short.

Potential promise of the Sky

It’s no secret that Vandersloot is one of the best point guards in the WNBA. Chicago has ranked no lower than fourth in the league in percentage of baskets assisted in each of the previous four WNBA seasons, and Vandersloot — who made history in 2020 as the first player to average 10 assists per game in a single season — had been a major reason why, routinely assisting on 40 percent or greater of all her teammates’ baskets.

Granted, the other side of this coin is that Chicago has struggled to keep the ball moving and the offense flowing when Vandersloot is on the bench, but that shouldn’t be nearly as much of a problem as it was in recent years. Not only do the Sky finally have a capable backup in Heal, but they also have one of the league’s premier frontcourt playmakers in Parker — arguably the most gifted passing big in WNBA history.

With this in mind, Vandersloot probably won’t post another record-breaking assisting metric in 2021, but if it makes the Sky less one-dimensional offense, it will be for the best. Parker’s ability to handle and pass the ball in transition — as well as thread the needle to cutters from the high post — will reduce Chicago’s dependence on Vandersloot to make plays for others, ideally keeping the Sky humming even when their prized floor general needs a breather. Additionally, having top-tier playmaking in both the backcourt and frontcourt will add plenty more wrinkles to Wade’s playbook, making the Sky less predictable and further opening things up for their players who excel at moving without the basketball.

Athleticism on the wing has been a strength of Chicago’s since the team drafted Diamond DeShields and Gabby Williams in 2018. The pair have combined with Kahleah Copper to form a core of perimeter players who thrive in transition, pushing the envelope to an extent that few opponents can match.

Williams will miss at least part of the 2021 season due to commitments to the French National Team, but the good news for Chicago is that DeShields appears to be completely healed from the injuries that nagged her throughout 2020. Copper, meanwhile, is coming off a career year. Though much of her production came at the expense of DeShields, there’s reason to believe the two are ready to coexist, especially if DeShields is ready to return to full strength.

And what better way to maximize the talents of play finishers like DeShields and Copper than by utilizing multiple playmakers to get them the basketball? Expect to see plenty of easy transition opportunities for the Sky wing players courtesy of Parker defensive rebounds and outlet passes.

Potential problems for the Sky

A team doesn’t need to draw fouls at will in order to field a strong offense, but it certainly doesn’t hurt. Though the Sky led the WNBA in effective field goal percentage last season (54.7 percent), their overall offensive efficiency was dragged down somewhat by a league-worst 0.218 free throw rate. According to Synergy Sports, the Sky drew a shooting foul on just 7.6 percent of their halfcourt possessions, ranking 11th among the 12 WNBA teams.

Perhaps DeShields’ limited state contributed to this — she’s typically very good at forcing her way to the rim and drawing contact — but the Sky as a whole tend to avoid contact rather than seek it out. If one player on the 2020 Sky embraced a foul-seeking mentality, it was Cheyenne Parker, who has put up a career free throw rate of 0.419 and whose presence on the court raised the team’s free throw rate to 0.248.

Of course, Parker is now in Atlanta, giving Chicago even fewer players who can get to the line on a consistent basis. A bounceback season from DeShields and a concerted effort to get Candace Parker shots in the restricted area will help matters, but it’s unlikely the Sky will be up there with the Aces and Mercury — two teams with players who consistently bully their way to the charity stripe — in terms of free-throw-to-field-goal ratio.

Another weakness of Chicago’s — though not as glaring as the team’s inability to draw shooting fouls — is a lack of offensive rebounding.

It’s also another weakness that may not have much room for improvement after Cheyenne Parker’s departure. Rebounding, unlike foul-drawing, is usually a team effort, and the Sky’s 2020 on/off court splits paint a clear picture: the Sky were a stronger offensive rebounding team with Parker on the court (29.5 percent offensive rebounding rate) than with her off the court (25.9 percent). Parker also accounted for a whopping 37.7 percent of Chicago’s putback scoring opportunities, per Synergy Sports.

Again, this isn’t an enormous weakness for the Sky, and Candace Parker is no slouch on the glass herself. It’s fair to wonder, though, who on Chicago’s roster will step up and be willing to do the dirty work when things aren’t running smoothly. None of Stefanie Dolson, Azurá Stevens and Ruthy Hebard have been impressive offensive rebounders at this point in their respective careers, so unless Wade encourages his perimeter players to crash the glass, one or more of the aforementioned bigs will need to make it their mission to get their team some extra possessions.

The Sky were one of the more talented teams in the WNBA last season, and they’ve decidedly improved upon that core to build a roster ready to compete for a championship. Chicago hasn’t won anything yet, of course, but the Sky won’t exactly be sneaking up on anyone, either. A top-four finish (and a first-round postseason bye) should be the minimum fans expect from Chicago in 2021, and a WNBA Finals run wouldn’t be much of a surprise.

Allen Iverson was a ruthless ankle breaker and a revolutionary cultural...

Basketball News - April 8, 2021
0
Photo: Nathaniel S. Butler/National Basketball Association/Getty In this episode of The Class of ’96, Bomani Jones looks at the life and career of Allen...

Hear from Trent Frazier after his game-high 22 points to lead...