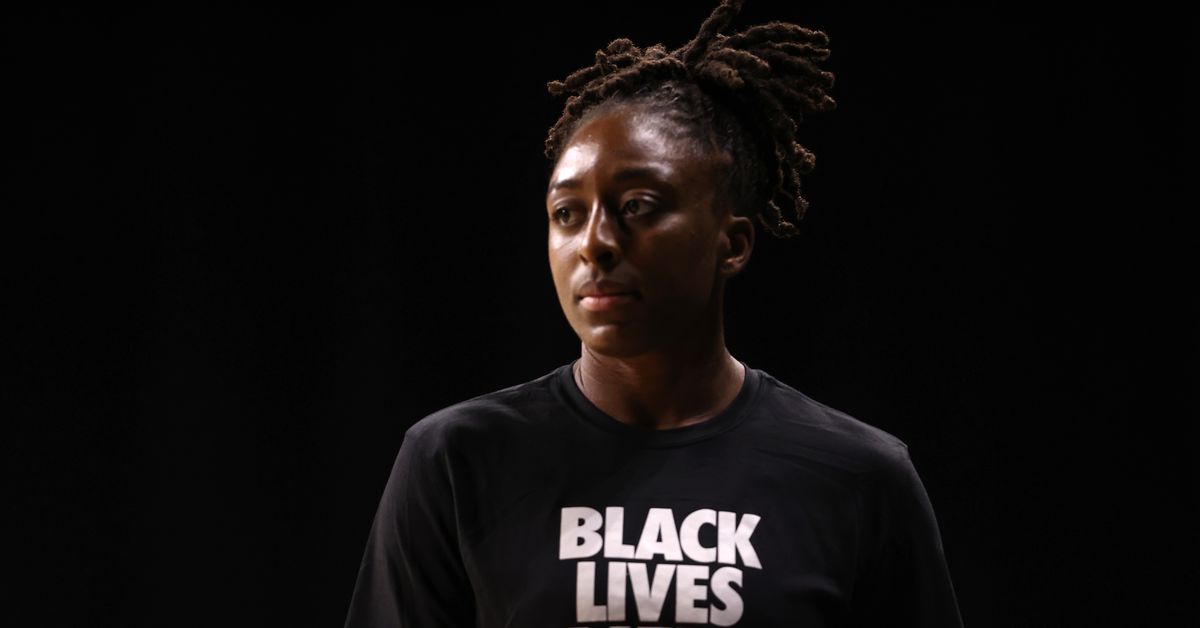 This verdict may begin to tell us, tell the world that the death of a Black person in America will not be overlooked. That the growing epidemic of police violence against Black people must end, will end, today. — WNBPA, “Justice for George Floyd”

During the 2020 WNBA season, WNBA players refused to overlook, and refused to allow fans to overlook, the deaths of George Floyd, Breonna Taylor and other Black Americans killed by police. By dedicating the season to social justice, the players used their platform to amplify the fears, violences and injustices disproportionately experienced by Black people in United States, especially in regard to interactions with the police.

Even after justice has been meted out — with a jury finding former Minneapolis police officer Derek Chauvin guilty of second-degree unintentional murder, second-degree manslaughter and third-degree murder on Tuesday afternoon — WNBA players will not overlook, and will refuse to allow fans to overlook, the fact that the American ideal of “liberty and justice for all” is far from a reality.

First time in what feels like forever that the justice system didn’t fail us. It’s a baby step…but it’s a step https://t.co/HMMhGqBbZc

For WNBA players, like many Americans, the surprising results of the trial, as police officers rarely have been convicted for perpetrating deadly violence against Black Americans, inspired an overwhelming sense of relief. Yet, this reaction — surprise and relief for the conviction of a police officer who murdered a Black man in broad daylight and on camera — underscores how much work remains to be done.

My mom was afraid to watch the verdict because she didn’t want to cry. She didn’t want to be heartbroken by another not guilty verdict. That pain that generations of Black people -not only across this nation, but the world- harbor is unbearable. We’re tired. Sick and Tired.

As reigning MVP A’ja Wilson emphasized in a statement:

We are grateful that today’s verdict brought accountability, however centuries of systemic racism still permeate our society. The fight for racial justice and equality continues. My teammates and I, along with the entirety of the WNBA, will not rest until the words of George Floyd’s daughter Gianna become a reality: ‘Daddy changed the world.’

For WNBA players, the work is far from done

A number of other WNBA players echoed Wilson’s words on social media.

The hardest part right now is that for many, while the verdict rendered guilty, the reality is that anxiety still remains.

This is a marathon, not a sprint. This is accountability, not absolution.

A step towards justice no longer being aspirational, but institutional.

There is still so so much work to be done. But this is a start towards the right direction. Let’s stick together and let’s strive for a better world. For you. For me. For everyone.

we continue to fight but this is a start, a step in the right direction…accountability!!!

On Tuesday night on NBA on TNT, Candace Parker articulated the work required — by WNBA players, by other athletes, by other Americans — to achieve full, unfettered and unqualified “justice”:

We’re sitting here on a sports show speaking about justice, and speaking about things that are going on in our court system. It’s not okay just to be a bystander of justice or our political system or democracy. And I think democracy, we think of as a destination and it’s a continuous journey and it has to be thought of that way. And just because we’re athletes…we have to actively participate in that because if we’re not we’re not doing our job…we’re failing the generation that comes after us…If you look at the past, and how many people before had to die and had to not receive justice for this to happen today…Although this was a step in the right direction, I think it’s really about accountability but it’s also understanding that this isn’t ‘it.’ There’s far more trials that are going other directions that shouldn’t, that don’t, that’s aren’t just. And so, yes, this is a step in the right direction; we still have so much more to go.

The WNBA expresses support for continuing quest for social justice

The WNBA and its organizations, continuing to take cues from their players, also issued statements in response to the verdict, redoubling their commitments to social justice initiatives.

While justice has been rightfully served in the case of George Floyd, we continue to mourn his loss and must not forget the countless others who have suffered injustice in countless ways throughout our country’s history. pic.twitter.com/ZVXY69Vj3B

What’s next for WNBA players in this fight?

Last week, the WNBA/WNBPA Social Justice Council introduced its focus for the 2021 season. While celebrating “the players’ history of advocacy,” the Social Justice Council will undertake another “season of advocacy” and continue to work “to combat racial injustice and promote voting rights, champion gender equality and LGBTQ+ advocacy, and advance public health initiatives.”

We look forward to seeing how WNBA players, led by the Social Justice Council, will use the platform provided by the 2021 season to push for change.

Which NBA players have the most remarkable hobbies?

No. 6 Tiffin downs No. 2 Glenville State at the buzzer...