From momentous upsets to big-time plays, there has been no shortage of excitement through the opening two rounds of the 2021 NCAA men’s basketball tournament. Before the Sweet 16 tips off, NCAA.com correspondent Andy Katz ranked his favorite player from each of the remaining teams on the March 23 episode of the March Madness 365 podcast.

As Katz emphasized on the show, this week’s rankings are not based on talent, but players he’s enjoyed watching and who have been impactful to their teams.

This week’s episode of MM365 also features interviews with Arkansas head coach Eric Musselman and Houston head coach Kelvin Sampson as well as the return of Chad “March Chadness” Aycock, who is back to help Andy revise his bracket. You can listen to the full episode below.

Alright. Now onto the rankings.

The Wildcats are one of three Sweet 16 teams to not beat a single-digit seed this postseason. But that doesn’t take away from Robinson-Earl’s importance. The sophomore has been asked to do even more for Villanova after Collin Gillespie went down with a season-ending knee injury and through two postseason games, Robinson-Earl has answered the call. He’s averaging 20 points, 8.5 rebounds, six assists and two blocks in leading the Wildcats to the second weekend.

Florida State has nine different players who receive double-digit minutes. Of those, eight score at least 5 points per game and four average double-figure scoring. Translation: It can be anybody’s night on any given night with the Seminoles. Katz went with the timely pick of Polite after the junior had a career-high 22 points along with five boards, four assists and four steals in FSU’s second-round win over Colorado.

SWEET 16 PREVIEW: A look at the unlikely, unpredictable 2021 Sweet 16 field

Replacing a point guard is not an easy task for most programs. Now, how about replacing a three-year starting point guard? It gets a bit more difficult, though Mike Smith has made the transition look easy in Ann Arbor. As Katz indicates, Smith didn’t know the system after coming to Michigan by way of Columbia, but found a way to fit right in after Zavier Simpson graduated. The senior is averaging 11.5 points and 5.5 assists in his first taste of NCAA tournament action.

There were questions about Jarreau’s availability for the second round after being a non-factor in the opening round due to injury. Not only did Jarreau play, he delivered what Katz called an “inspiring game” with 17 points and five rebounds in 32 minutes against Rutgers. The senior guard is a leader for the Cougars and will have a chance to help the program return to the Elite Eight for the first time since 1984. 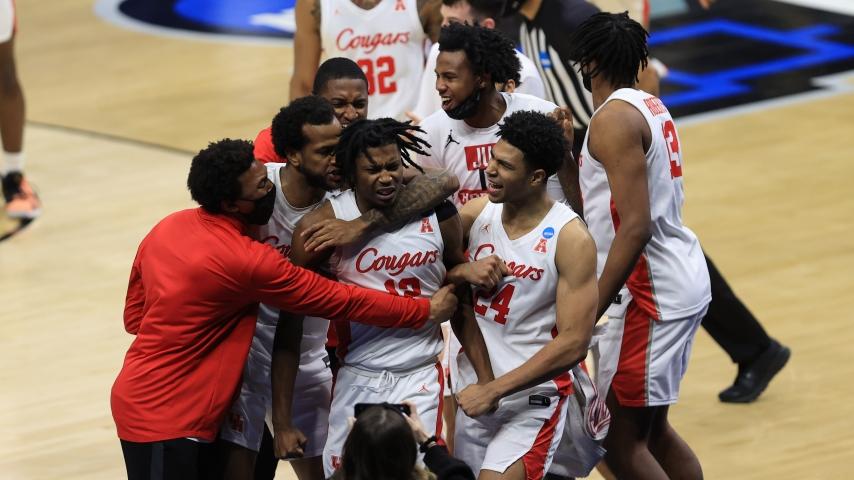 Zegarowski’s first trip to the NCAA tournament has been an eventful one for Creighton. The junior dropped a team-high 17 points and eight assists to steer the Bluejays away from a 12-5 upset against UC Santa Barbara. He followed up with 20 points in a win over Ohio, sending Creighton back to Sweet 16 for the first time since 1974. The road to this point hasn’t been smooth, but the Jays are still dancing with Zegarowski being one of the reasons why.

Oregon State was picked to finish last in the Pac-12 ahead of the season, yet here they are — dancing along into the Sweet 16. The Beavers are one of the more exciting stories this March and while they win by committee, Ethan Thompson is establishing himself as a household name. OSU’s senior guard posted a 13-point, 10-rebound double-double to knock off Tennessee in the opening round before making 15-of-16 free throws in a 26-point effort to shock Oklahoma State.

Don’t hit that panic button just yet. I know what you might be thinking, Baylor has lost once this season and Butler was a semifinalist for the Naismith Trophy. To reiterate, these rankings are not talent-driven. Butler has been consistent through two NCAA tournament games, averaging 14.5 points, 5.5 assists, 4.5 rebounds and 3 steals per contest. He hasn’t led the Bears in scoring either game, but he hasn’t needed to. Baylor’s guard depth has been on full display in wins of 24 and 13 points.

Make it two double-doubles in two games for Mobley in the NCAA tournament. The freshman has been a force at both ends of the floor, scoring at all three levels while showcasing why he is a finalist for Naismith Defensive Player of the Year. Mobley’s averaging 13.5 points, 12 rebounds and three blocks per game. How’s this for a résumé? USC just handed Kansas its worst-ever NCAA tournament loss. Another win for the Trojans and they’ll be in the Elite Eight, a destination the program last reached a few months before Mobley was born.

Oregon didn’t play for 10 days following its Pac-12 tournament semifinal loss to Oregon State. Neither Duarte nor the rest of the Ducks showed any sign of rust in a runaway win over Iowa. The senior notched a team-high 23 points to go with seven assists, hitting several big shots as Oregon knocked down 56 percent from the floor on an afternoon where all but six of its 95 points came from the starting lineup. 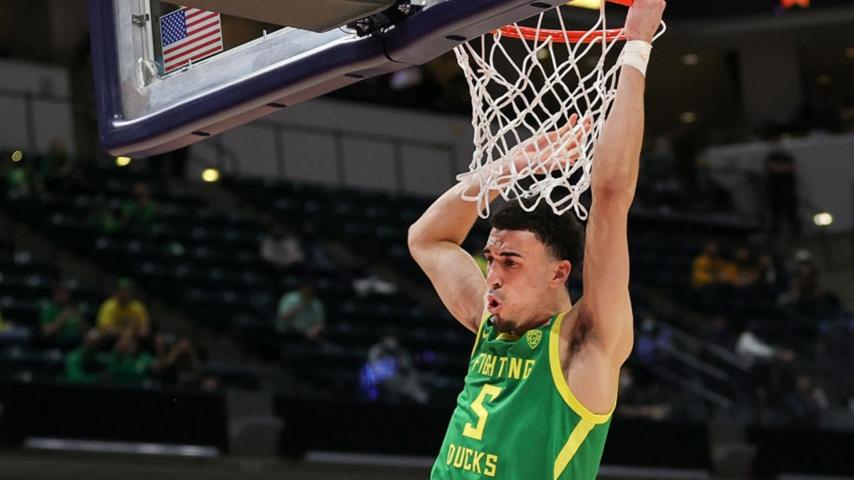 This could’ve been a toss-up with Moses Moody in the mix, but Katz picked Smith for the Razorbacks with the senior finding himself another gear in the early rounds. Smith racked up a season-high 29 points to go with 13 rebounds against Colgate before following it up with another 20 points in a win over Texas Tech. The arrival of Smith helped Arkansas return to the Sweet 16 for the first time in 25 years.

How impressive has Jones been down the stretch? Katz referred to the Alabama senior as his mea culpa after not picking him as an All-American. Jones is the leader of his team and hasn’t slowed after winning the SEC’s Player of the Year and Defensive Player of the Year awards. Jones is averaging 13 points and six rebounds through Alabama’s first two tournament wins, displaying his abilities to control the game at both ends.

Suggs’ talent has been on display since the ‘Zags first game of the season. Now they’re three wins away from becoming the first undefeated national champion since Indiana in 1976. The freshman guard has averaged 11 points per game during the tournament, showing his abilities to knock down big shots and throw some incredible passes. Like Baylor with Jared Butler, Gonzaga has a number of options with All-Americans Corey Kispert and Drew Timme sharing the floor with Suggs.

There’s something about Syracuse as a double-digit seed in recent years. Only this time, head coach Jim Boeheim’s team is being led on the floor by his own son, Buddy. The younger Boeheim has been electric this postseason, first dropping 30 points in an upset of San Diego State before lighting up West Virginia for another 25. Boeheim has buried 13 triples in two games, making him one of the hottest shooters in college basketball right now. Like Arkansas’ Justin Smith, Jaquez had a revelatory game of his own this March. The sophomore erupted for a career-high 27 points in the First Four, leading UCLA back from a 14-point deficit to an eventual overtime win. Jaquez is averaging 11.5 points and 7.5 rebounds in the two games since to help the Bruins reach the Sweet 16. His stats might not pop off the page during these first two rounds, but the Bruins may not have advanced if not for his First Four heroics.

Abmas (pronounced Ace-mas) was college basketball’s leading scorer at 24.4 points per game before he ever picked up a ball in Indianapolis. In the week since, he’s improved that scoring average after torching Ohio State for 29 points and then dropping 26 points on Florida. But most of all, he’s made sure college basketball fans know his name. Oral Roberts is the second-ever 15-seed to reach the Sweet 16 and if Abmas has another big night, the Golden Eagles could make history by reaching the Elite Eight. 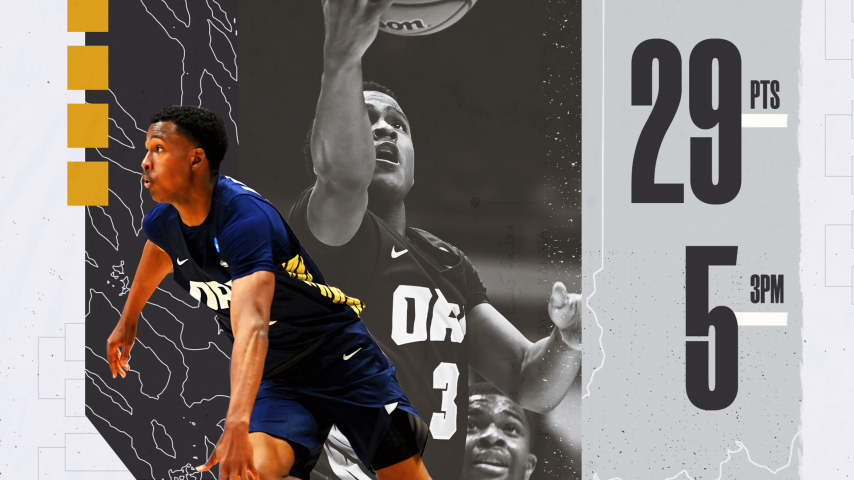 If you’ve been scanning this list for Krutwig’s name, look no further. Katz has him marked as the most fun player left in this tournament fresh off the Ramblers’ second Sweet 16 trip in four years. According to Katz, Loyola Chicago’s big man reminds Ernie Johnson, Charles Barkley and Kenny Smith of Nikola Jokic, minus the 3-point shot. Krutwig put on a clinic with his footwork, passing and scoring with a 19-point, 12-rebound, 5-assist, 4-steal line that helped knock out top seed Illinois. The play of the game that stood out to Katz was Krutwig’s unbridled enthusiasm after helping on a double team to create a game-sealing turnover on Ayo Dosunmu.