March Madness is almost here, after a longer-than-usual layoff. In honor of the 68 teams in the tournament, here are 68 predictions for the 2021 NCAA Tournament.

I’ll revisit these picks before the Sweet 16 (and make a few more).

1. No. 1 Gonzaga and No. 2 Baylor will finally meet in Indianapolis, just like they were supposed to in December. Dec. 5, 2020. That was the day when Gonzaga and Baylor — then ranked No. 1 and No. 2 in the country, respectively, just like they are now — were scheduled to meet in Indianapolis inside Bankers Life Fieldhouse. But the game was called off shortly before tip-off due to positive COVID-19 tests. The Bulldogs and Bears were the last two undefeated teams in the country and it’d only be fitting if they met in the same city where they were originally scheduled to play four months ago.

2. Iowa or Ohio State will not make it past the first weekend of the NCAA tournament. Both Big Ten schools are a projected No. 2 seed in March Madness correspondent Andy Katz’s latest NCAA tournament predictions and while they posted the No. 1 and No. 2 adjusted offensive efficiency ratings in conference play, respectively, they ranked seventh and 10th, respectively, defensively. Ohio State lost its last four games of the regular season, albeit three of those games were against a projected No. 1 or No. 2 seed, according to Katz. The Buckeyes lack size inside and the Hawkeyes, which could be limited by an injury that Joe Wieskamp suffered against Wisconsin, lack quickness in the post. One of them will not make the second weekend.

4. Rutgers will make the NCAA tournament as a No. 9 seed and lose in the first round, just as it did the last time it made the NCAA tournament. The last time the Scarlet Knights made the Big Dance was 1991, when the Bob Wenzel-led squad went 14-4 in the Atlantic 10 and earned a No. 9 seed, before losing to No. 8 seed Arizona State in the first round.

5. The No. 4 seeds will combine to win more games in the NCAA tournament than the No. 3 seeds. In Katz’s latest bracket predictions, he has Purdue, Texas, Oklahoma State and Florida State on the No. 4 seed line, with West Virginia, Kansas, Arkansas and Villanova as projected No. 3 seeds.

6. The Pac-12 will combine to win three games in the NCAA tournament. In Katz’s latest predictions, he has No. 5 seed USC, No. 6 seed Oregon, No. 7 seed Colorado and No. 8 seed UCLA in his projected field.

7. Syracuse will make the NCAA tournament as a double-digit seed and win multiple games in the tournament. Just like the Orange did in 2016 and 2018. Yes, a win in the First Four would count as one of those wins.

8. Houston will receive a No. 2 seed, then make its deepest NCAA tournament run since 1984, when it was also a No. 2 seed. The Cougars played for the 1984 title (just as they had the year before), and they lost both times. The year before that, they lost in the Final Four. They lost those three games in the Final Four by a combined 16 points, which was one of the  more impressive consecutive-year NCAA tournament runs that didn’t end in a national championship. Hakeem Olajuwon was on each of those three teams and Clyde Drexler was on the 1982 and 1983 teams. Houston is 3-6 in the NCAA tournament since losing in the 1984 title game.

9. The reigning national finalists will both make the second weekend but neither will make the third. I’m talking about Virginia and Texas Tech, of course, who met in the 2019 NCAA Tournament final, where the Cavaliers won in overtime. They’re both projected to be No. 5 seeds in Katz’s latest predictions.

11. There will be at least one triple-double in the NCAA tournament. That hasn’t happened in … two years, when Murray State’s Ja Morant posted 17 points, 16 assists and 11 rebounds in an opening-round win over Marquette. But don’t let that mislead you into thinking that big stat lines like that are common. The next-most recent triple-double in the NCAA tournament was by Michigan State’s Draymond Green in 2012 and Morant’s triple-double was just the ninth since assists became an official NCAA stat. Keep an eye out for Illinois guard Ayo Dosunmu.

12. No Big East team will win more than two games in the NCAA tournament. Villanova senior point guard Collin Gillespie’s season-ending MCL injury clipped the wings of a Wildcats squad that is a projected No. 3 seed in Katz’s latest bracket predictions. Then, sophomore Justin Moore suffered an injury in Villanova’s first game without Gillespie and Moore will likely miss the entire Big East tournament, according to coach Jay Wright.

14. Gonzaga will win by at least eight points in every game en route to the Final Four. Gonzaga’s smallest margin of victory this season was five points against West Virginia, back on Dec. 2 in its third game of the season. After that? Eleven points at BYU and 11 points over Iowa on a neutral court.

15. Two double-digit seeds will make the Sweet 16 and one of them will be Georgia Tech. The Yellow Jackets haven’t made the field of 68 since 2010 and they haven’t won multiple games in the NCAA tournament since they lost in the national final in 2004. 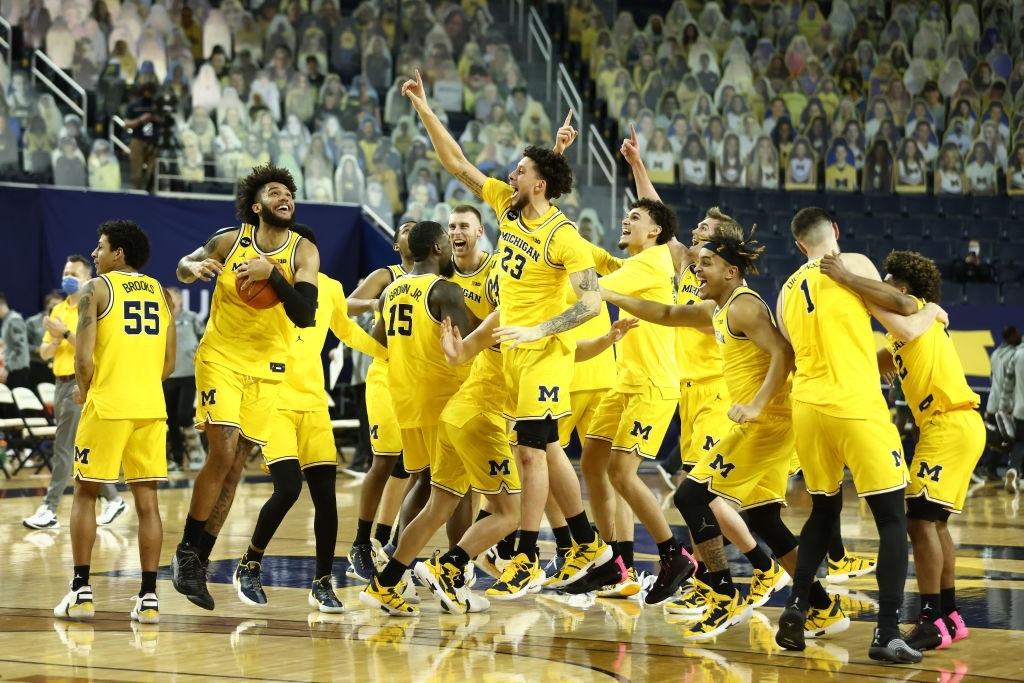 19. Loyola Chicago will win a number of games in the NCAA tournament that’s divisible by two. “So you’re saying there’s a chance of another Final Four run?” Not ruling it out for a team ranked in the top 10 on kenpom.com, but set your sights on a Sweet 16 run for the Ramblers.

20. The Four Cs-ons: Clemson, Colorado, Connecticut and Creighton will be in four consecutive spots on the S-curve. Colorado, Clemson and Creighton are all projected No. 6 seeds in Katz’s latest predictions, with UConn as the final No. 7 seed, but could a Big East tournament title elevate the Huskies to reach those other schools?

GET READY FOR MARCH: Track all of the automatic qualifiers for the NCAA tournament

21. There will only be five letters in the alphabet that won’t be represented by at least one school whose name starts with that letter. “U” counts for the purposes of acronyms, like USC and UCLA. My guess is E, J, Q, Y and Z will not make an appearance.

23. In its first-ever NCAA tournament appearance, Grand Canyon will have the lead at the under-4 media timeout in the first half. But it won’t win the game.

24. The combined seed total of the schools that make that Final Four will be less than 10.

25. There will be four freshman starters in the Final Four.

31. Two Big Ten schools will meet in the Elite Eight, with a Final Four berth on the line.

32. The teams in the Elite Eight will come from five different conferences, with two conferences having at least two teams.

33. There won’t be a single perfect bracket left in the Bracket Challenge Game after 6 p.m. ET on Saturday, March 20. That’s the second day that first-round games are held in the NCAA tournament. In 2019, Gregg Nigl’s bracket, incredibly, remained perfect through the first 48 games.

34. Villanova will lose in the Round of 32 for the fifth time in the last seven NCAA tournaments. Of course, it won the title the other two times. (Note that what is currently referred to as the second round was called the third round from 2011 through 2015).

35. Only six of the teams that were ranked in the top 10 in the preseason will still be in the NCAA tournament after the first two rounds.

37. The Final Four’s Most Outstanding Player will be a junior or senior.

38. Despite the entire NCAA tournament being held in Indiana, only one team from the state will participate in it — Purdue. 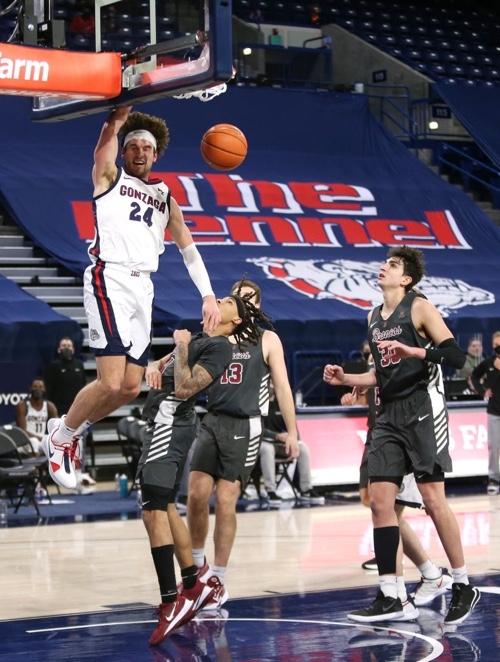 39. Gonzaga’s Corey Kispert will be the leading scorer in the NCAA tournament.

40. But he won’t be the Final Four’s Most Outstanding Player.

41. Cleveland State, which ranks first in kenpom.com’s “Luck” metric as of March 8, will make the NCAA tournament but it won’t win a game once it’s there.

42. There will be a double overtime game in the NCAA tournament.

43. At some point in the NCAA tournament, at least half of the field will be from the Big Ten or the Big 12.

44. The national champion will be a team that has made at least 35 percent of its threes this season, as of Selection Sunday.

48. The schools that played in the Champions Classic will combine to win three games or fewer.

50. A team will win a game in the tournament despite making four or fewer 3-pointers.

MARCH MADNESS: 21 numbers to ponder before the NCAA tournament

51. A team will lose a game in the tournament despite making 12 or more 3-pointers.

52. A team will win a game in the NCAA tournament while scoring 57 points or fewer.

53. A team will lose a game in the NCAA tournament while scoring 87 points or more.

54. A team that is currently unranked will make the Elite Eight.

55. At least 11 teams that are currently ranked will not make the Sweet 16.

56. A team will lose a one-possession game in the NCAA tournament after missing at least 10 free throws.

57. A team will win a game in the NCAA tournament while missing no more than two free throws.

58. Illinois and Baylor will come one game shy of a potential rematch.

59. Gonzaga will score at least 100 points at least twice in the NCAA tournament.

60. Virginia will score in the 50s in one NCAA tournament game and more than 75 in another.

61. UConn will have a winning streak of at least six games in March, which would be its longest since it won six in a row to win the 2014 NCAA Tournament.

62. The Missouri Valley Conference will be responsible for more NCAA tournament wins than the Mountain West.

63. Gonzaga’s Jalen Suggs will be the highest-drafted player in the NBA in the future who will participate in this year’s Final Four.

64. One school that made the College Football Playoff last season will make it to the Elite Eight, if not further.

66. At least two teams that make the Sweet 16 will have won fewer than 16 games in the regular season.

68. Nine double-digit seeds will win in the first round.