Gonzaga is so close now. Two more wins in the West Coast Conference tournament — the odds seem good, given how the Zags are 15-0 in league games by an average of 24 points — and they join The Club.

The Club? The other 19 teams who carried perfect records into the NCAA Tournament. It hasn’t happened very often lately, Gonzaga would be only the third in 30 years. And there has not always been a happy ending for the 19 unbeatens. Seven won national championships, two more played in the title game. But seven didn’t get to the Final Four, and some had particularly excruciating exits. Here were their March fates:

FILL IT OUT: Get a printable 2021 NCAA bracket here

Coach Gordon Ridings had a heart attack days before the season opener and a 29-year-old assistant named Lou Rossini had to take over. Quite the rookie campaign. The Lions swept through the Ivy League and finished the regular season 21-0, but were summarily ousted by Illinois 79-71. They are the only member of The Club to go one-and-done in the NCAA Tournament, but there were no early round easy marks back then — only 16 teams were in the bracket. 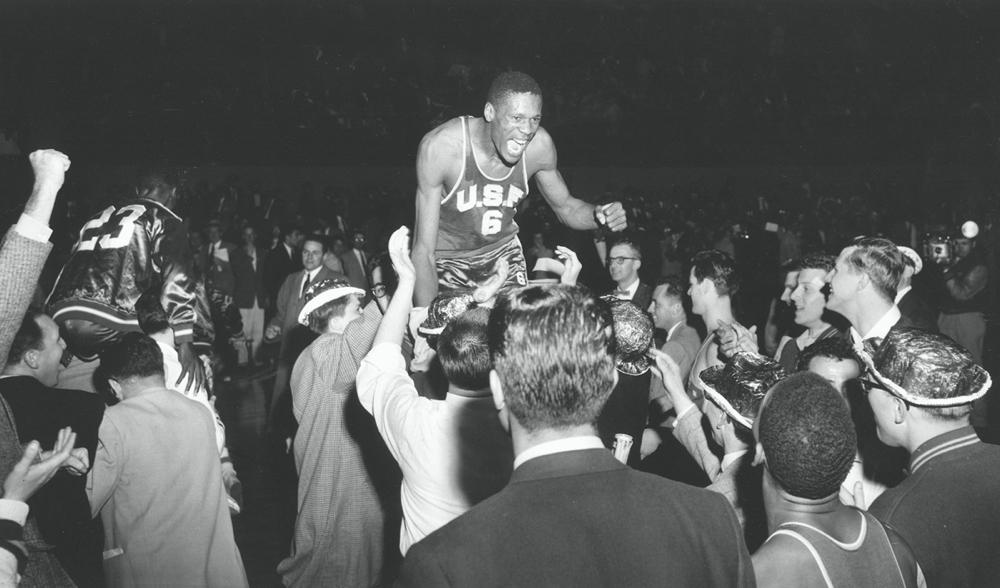 The Dons will forever own the first perfect season in college basketball at 29-0. Matter of fact, with Bill Russell (above in 1955) ruling the paint, they went 57-1 in back-to-back national championship seasons. Russell capped his career with 26 points and 27 rebounds in the 83-71 win over Iowa for the 1956 title, which began with a 15-4 Hawkeyes’ lead. That wasn’t the amazing part; Russell had plenty of games like that. The amazing part was those numbers weren’t good enough to get him named Most Outstanding Player of the Final Four. That went to Temple’s Hal Lear who scored 48 points in the third place game.

Nobody ever won a national championship like the Tar Heels and nobody ever will again. They went three overtimes to beat Michigan State in the semifinals, and three more overtimes the next night against Kansas and Wilt Chamberlain for the title. The Jayhawks scored only seven points in the 15 extra minutes. Then again, North Carolina only scored eight, and won 54-53.

The Buckeyes stormed into the national title game 27-0 and seemed all ready to repeat as champions. Then Cincinnati happened. The Bearcats committed only three turnovers in 45 minutes and won 70-65 in overtime. Included in Ohio State’s scoring was two points off the bench by reserve Bob Knight. It was a long day for the Buckeyes, but long for Cincinnati, too, as the two teams had to pace and wait forever to play, while St. Joseph’s finally outlasted Utah 127-120 in four overtimes in the third-place game.  Cincinnati beat Ohio State for the championship the next year as well, then the two didn’t meet again in the NCAA Tournament for a half-century.

Nation, say hello to John Wooden. The first of 10 championships came with a 30-0 team that did not have a starter taller than 6-5. The Bruins had to claw their way into the title game, with NCAA Tournament victories by five, four and six points, before putting away Duke for the championship, 98-83. The championship faucet had been turned on full in Westwood. 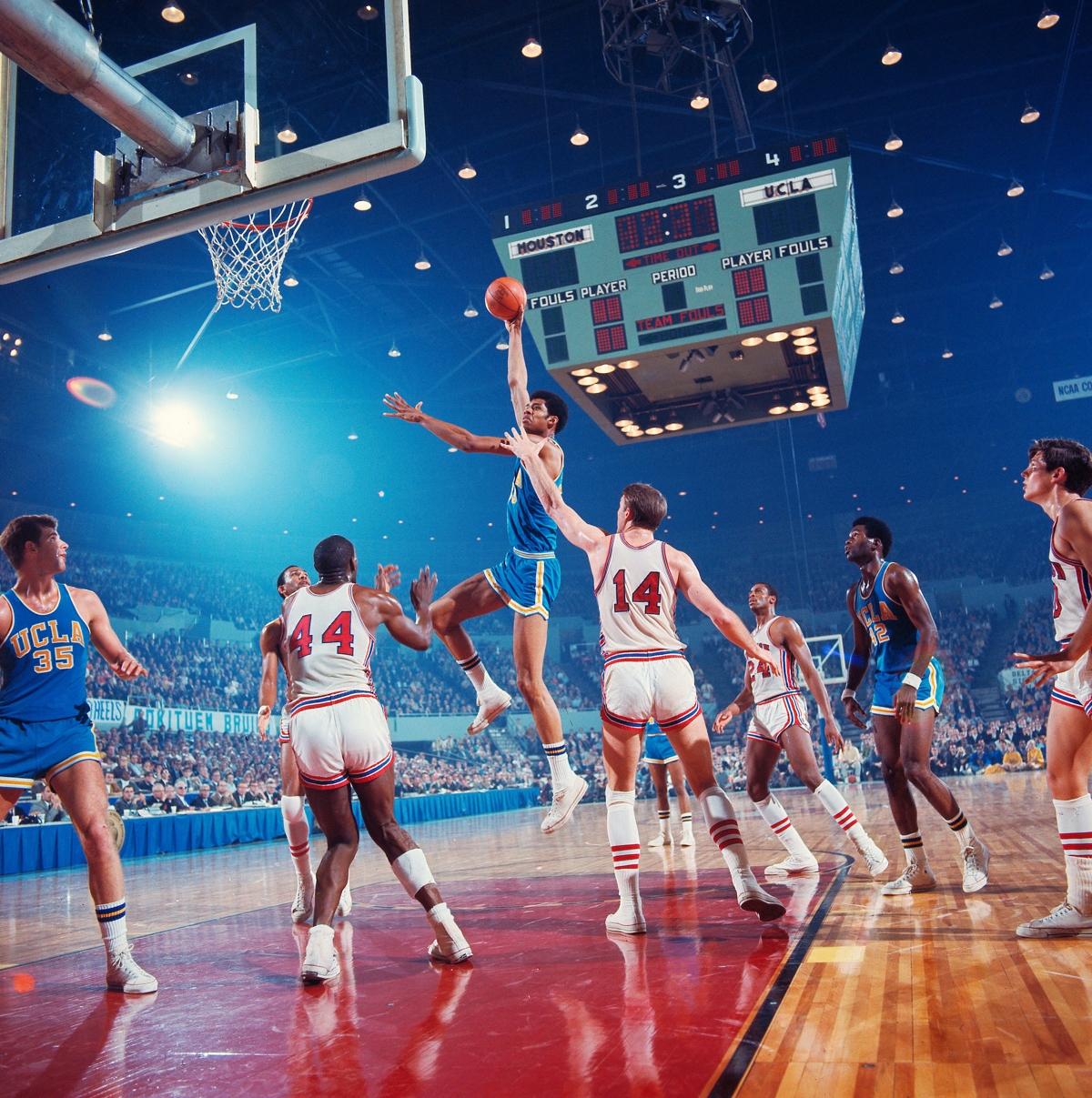 These Bruins had a guy taller than 6-5. Kareem Abdul-Jabbar was known as Lew Alcindor (above, in 1968) when he made his 7-2 presence known in his first varsity game, scoring 56 points against USC. By the end of the season, UCLA was 30-0, with 27 of the victories by double digits. The Bruins rolled over their four tournament opponents by 49, 16, 15 and 15 points.

The Bonnies were 23-0 when they ran into a young North Carolina coach named Dean Smith and lost to the Tar Heels 91-72 in the Sweet 16.  Their frustration wasn’t over because they actually had regional third place games back. They must not have been in the mood, losing to Columbia by 20 points. This was the first year there were two unbeatens in the tournament, but much bigger on the marquee was…

The Cougars won 28 times during the regular season but only one was called the Game of the Century. That’s when they ended UCLA’s 47-game winning streak in the Astrodome, 71-69, the night that college basketball came of age as a television sport. Unfortunately for Houston, there was a P.S. The two teams met again in the Final Four, and Alcindor and his Bruinmates were in full-blown revenge mode. It ended 101-69, one of the most devastating displays the NCAA Tournament has ever seen. Elvin Hayes had averaged 37.7 points a game for Houston, and had 39 that night in the Astrodome. In the rematch, he scored 10.

When star Dean Meminger fouled out with five minutes left, Marquette’s doom was sealed against Ohio State in the Sweet 16. Barely. The Buckeyes escaped 60-59. Two days later, there would be another  perfect-season thud, so inexplicable it was hard to believe.

The 28-0 Quakers not only owned the Ivy League that season but also beat Villanova by eight points. Two months later, the Philadelphia Big 5 schools only 16 miles apart met again in Raleigh for the right to go to the Final Four. Final score: Villanova 90, Penn 47. How to explain such a thing? The Quakers couldn’t, all they wanted to do was go home. They walked on the plane for the return and discovered . . . the triumphant Villanova team on the same flight. What was worse, when the plane landed in Philadelphia, they had to gaze upon thousands of celebrating Wildcat fans who had gone to the airport to welcome the regional champions. As NCAA Tournament bad days go, that one’s hard to beat.

Two national championships, 60 games, no losses, and only six of the victories by single digits. It was the Walton Gang run amok, never more so than in the 1973 title game when Bill Walton took 22 shots, missed one of them and finished with 44 points in an 87-66 rout. That made seven championships in a row for Wooden.  Nobody else has ever won more than two consecutively.

Game No. 3 in Indiana’s 29-0 regular season was a 98-74 pounding of Kentucky in Bloomington, best remembered for the final minutes when Bob Knight tapped Kentucky counterpart Joe B. Hall on the back of his head. That didn’t go over well in the Commonwealth. Flash forward three months to the regional championship in Dayton, when two things were very different. The Hoosiers weren’t at home and Indiana star Scott May had a cast on his broken arm. He played only seven minutes and scored two points, and Kentucky won an epic, 92-90, as both coaches kept their hands to themselves. Kentucky’s leader scorer was Mike Flynn, who had been Mr. Basketball — in Indiana. Losing put a fire into the Hoosiers that burned for 12 months. 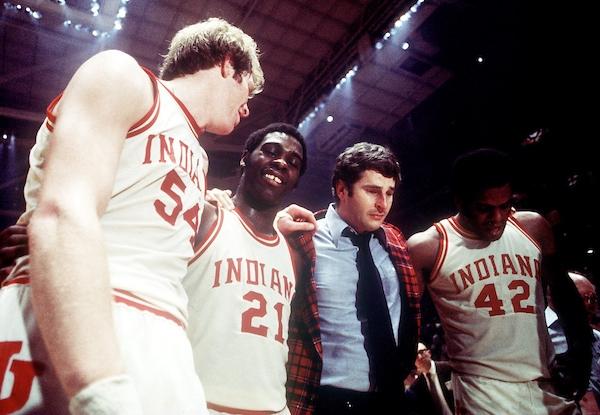 This time Indiana finished the job, and nobody has done that since. The Hoosiers are the 1972 Miami Dolphins of college basketball, always a topic of conversation whenever a team takes a spotless record late into the season. Like Gonzaga, 2021. Indiana’s 86-68 win over Michigan was the first time two teams from the same conference ever played for the title, and the result seemed pre-ordained. But it was not that automatic. The Wolverines had taken the Hoosiers into overtime in Bloomington and were ahead by six points at halftime of the championship game.

It’s often forgotten that Indiana didn’t own the only perfect record at the 1976 Final Four. The Scarlet Knights came in at 31-0 but were bounced by Michigan 86-70. We think of unbeaten regular seasons as rare now, but Rutgers was one of seven in a six-year span.

Larry Bird and the 33-0 Sycamores against Magic Johnson and Michigan State in the unforgettable title game. You probably know the rest. But there might be three you don’t know: The champion Spartans lost six times that season, including an 18-point shellacking by 6-21 Northwestern. Also, the Bird-Johnson showdown nearly didn’t happen, as Indiana State barely got by Arkansas 73-71 in the regional championship and DePaul 76-74 in the national semifinals. Also in one way, Indiana State was an echo of the unbeaten 1951 Columbia team. Before the season head coach Bob King suffered a heart attack and brain aneurysm and assistant Bill Hodges had to take over.

The defending national champion Rebels seemed unstoppable at 34-0, with only two games won by under 12 points, and an offense that broke 90 points 23 times. Until they were stopped at the Final Four by Duke, a program they had demolished by 30 points in the 1990 title game. A classic with 25 lead changes was decided by two late Christian Laettner free throws, 79-77. Two nights later, Mike Krzyzewski had his first title.

When you’re 35-0 and a No. 1 seed, you don’t expect to be facing a blueblood in the second round. But Wichita State rolled through its first game and then ran smack into — Kentucky. The Wildcats had 10 losses and a No. 8 seeding, but by then were onto something magical. The 78-76 victory over the no-luck Shockers would be part of a Kentucky run of five NCAA Tournament victories by a combined 18 points, until Connecticut ended the spell in the championship game. “At the end of the day, someone’s got to go home,” Wichita State’s Ron Baker said. 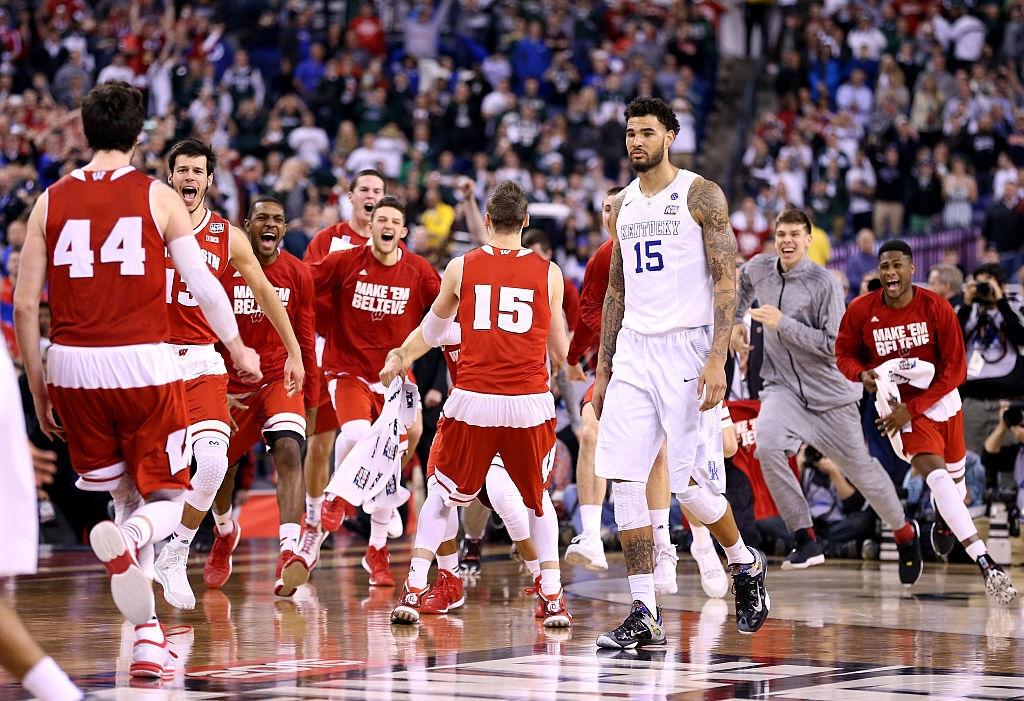 One year later, Wisconsin did unto Kentucky what Kentucky had done unto Wichita State, as the 38-0 Wildcats were taken out by the Badgers 71-64 in the Final Four. Wisconsin was carried by Frank Kaminsky, who had 20 points and 11 rebounds on the day he turned 22. “Best birthday present I’ve ever had,” he said. The game was in Indianapolis, the same place UNLV fell to Duke.

And where Gonzaga will be playing in a couple of weeks.