Note: All games played through Sunday, Feb. 14, were taken into account.

It was too difficult to choose between Brooklyn Pannell’s pair of dominant outings last week. So, we’ll discuss both. The Charleston (WV) senior scored a career-high 41 points on 14-of-23 shooting during the Golden Eagles’ 82-53 win over Wheeling on Feb. 8. Pannell shot 6-of-9 from deep and 7-of-9 from the stripe while adding two rebounds, one assist and one steal. She followed that up with 35 points, nine rebounds, five assists, three steals and one block in Charleston’s 86-64 triumph over West Virginia State on Feb. 10. This time, Pannell went 8-of-10 from beyond the arc.

Destiny Johnson dropped a career-high 34 points on 11-of-19 shooting in the Bobcats’ 74-64 victory over Converse on Feb. 9. She went 4-of-6 from beyond the arc and made all eight of her free-throw attempts. The 5-6 guard also snagged a game-high nine rebounds while adding three steals and two assists in just under 34 minutes of play. Those three steals were a game-high as well.

THE DII REPORT: New men’s basketball Power 10 rankings and a trip around the diamond

Marauders’ senior Lauren Rotunda recorded a season-high 28 points and 16 boards against MSU Moorhead on Feb. 12. Rotunda shot 10-of-22 from the floor and 7-of-9 from the free-throw line. She was responsible for more than half of Mary’s 31 team rebounds, and grabbed 12 on the defensive end. The guard also added two assists and one block in nearly 39 minutes of action.

Alex LaPorta posted a 29-point, 10-rebound double-double in the Tritons’ 77-54 win over Missouri S&T on Feb. 11. The senior shot 13-of-23 from the floor and also flirted with a triple-double. She dished out seven assists and came away with two steals. Those seven dimes were tied for a game-high with Miners’ guard Marta Durk. LaPorta’s game-high 29 points were the most she’s scored all season.

Who says midrange scoring is a lost art? Please point them in the direction of Maddie Sutton. The guard finished with a career-high 32 points on 10-of-15 shooting in the Pioneers’ 85-54 victory over Queens (NC) on Feb. 8. All 15 of her field-goal attempts came from inside the 3-point line. She also went 12-of-14 at the stripe while adding 16 rebounds, four assists and one steal. This was Sutton’s 12th double-double of the season, and she leads DII with 13 as of Feb. 16.

Brenden Welper is a graduate of DePaul University. His work has appeared on FanSided and ChicagoTribune.com. You can follow him on Twitter at @BrendenWelper. 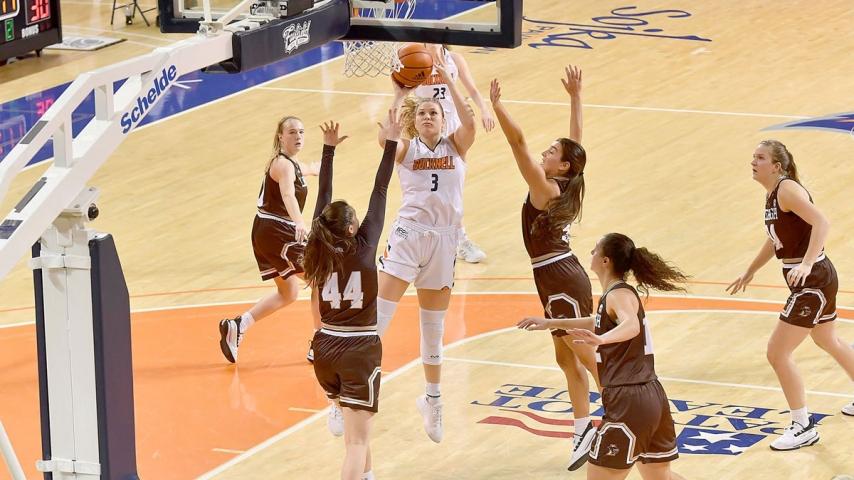 Here are three games to watch in DII women’s basketball for the weekend of Feb. 19-21. The NCAA will allow a limited number of fans at the 2021 Division I Women’s Basketball Championship being held in the San Antonio region, with a capacity of up to 17% from the Sweet Sixteen through the Women’s Final Four. The decision to limit capacity while requiring masks and physical distancing was made in conjunction with local health authorities due to the COVID-19 pandemic.

Women’s basketball rankings: Texas A&M jumps to No. 2 in Week 14 of the Power 10