For the first time in Arkansas program history, the Razorbacks have now knocked off two teams in the top-5 in the same season. After previously defeating then-No. 4 Baylor back on December 6, Arkansas this week took down No. 3 UConn, 90-87 on Jan. 28 and followed that up with a 77-67 win over Auburn on Sunday to earn NCAA.com Team of the Week honors.

Arkansas senior guard Chelsea Dungee scored a season-high 37 points in the win over previously undefeated UConn, connecting on 13 of her 21 shots on the night, including four of her five three-point attempts. Dungee saved her best for last, with 22 of those points coming in the second half. Redshirt senior guard Amber Ramirez added 22 points of her own, shooting 50 percent from the field (8-16) and 50 percent from deep (5-10). For UConn it was the first loss of the season for the Huskies and only their ninth loss as a program since the 2014-15 season.

MARCH IS COMING: The 2021 NCAA women’s basketball bracket, predicted just past the halfway mark of the season

Arkansas, which leads the Southeastern Conference in three scoring categories this year, had no problem on the offensive end against UConn in the second half. The third quarter was owned by the Razorbacks, as the Hogs outscored UConn 31-19 in the frame, including a 9-0 run out of the gate, aided by six three-pointers on seven attempts. Despite falling in several close games earlier in the season, Arkansas did not falter late against the Huskies, making clutch shots down the stretch to hold the advantage until the final buzzer.

The Razorbacks (13-6 overall and 3-5 in SEC play), followed that up with a 10-point win over Auburn, dominating the Tigers 68-49 from the second quarter until the final horn. Ramirez tallied a game-high 19 points thanks to five three-pointers in the game. She also chipped in with four rebounds and three assists. The Razorbacks’ big three was firing on all cylinders in this one, as Dungee and Destiny Slocum also came up big for the Hogs, going for 16 and 14 points, respectively.

Arkansas which moved from 19th to 16th in the Monday’s Associated Press Top-25 Poll, will return to action on Feb. 4 at Missouri.

The Naismith Memorial Basketball Hall of Fame and the Women’s Basketball Coaches Association announced the Top 10 candidates for the 2021 Nancy Lieberman Award on Monday, Feb. 1. 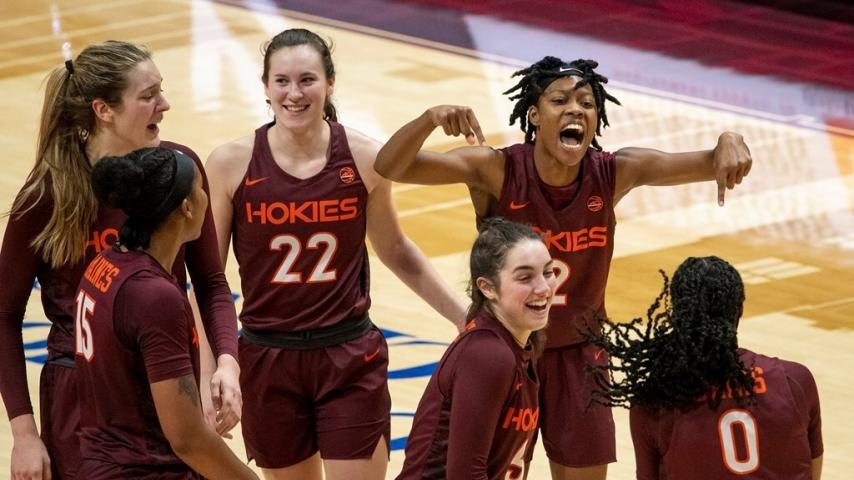 On a loaded night of women’s basketball games Thursday, Virginia Tech upset No. 2 NC State while No. 19 Arkansas took down No. 3 UConn. Here’s a recap of the crazy night.

Here are the top college volleyball series to watch this week

Take a look at the full breakdown of the top NCAA women’s volleyball series to watch in the second week of the season, including UCLA vs. Oregon.