All rankings are from the NET, which is updated daily, unless otherwise noted. Undefeated San Diego State is No. 1. The Aztecs play their next game on Tuesday at home against New Mexico. The NET rankings are a primary tool the NCAA selection committee uses to evaluate a team for the NCAA tournament. You can read more about the NET and how it is used to quantify the strength of every team here.

Here are the Top 25 teams in the NET rankings, which are updated daily and include all 353 Division I men’s basketball teams.

For comparison, below is the latest AP Top 25 poll, which is updated every Monday during the season.

Here’s some history of the AP Poll, per its website. The first poll had only 20 teams — and Saint Louis was the first-ever No. 1. The poll then dropped to only 10 teams during the 1960s before going back up to 20 later in the decade and through the 1988-89 season. After that, the AP Poll started ranking 25 teams, a number that remains today. The final AP Poll each season is released after the NCAA tournament bracket is revealed.

And here is the USA TODAY coaches poll, updated every Monday:

Colorado and Marquette each surged in the latest men’s basketball Power 36 after the Buffaloes and Golden Eagles both jumped double-digit spots. Check out the rest of the newest rankings here. 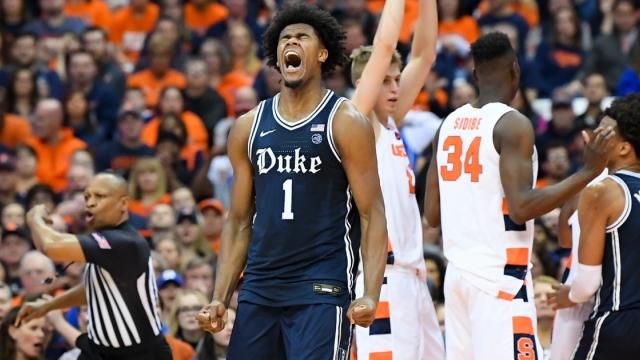 These are the toughest remaining games for undefeated San Diego State

Watch all 29 Anthony Davis blocks from the 2012 NCAA tournament

College basketball’s 13 most prolific scorers of the modern era