Vibes weren’t great as Carmelo Anthony said goodbye to both Denver and New York. But as time has passed, should his jerseys hang in the rafters someday?

The marriage between pure numbers and their correlation to Carmelo Anthony’s prime have been about as rocky as the Rocky Mountains; as confusing as a city that never sleeps (Seriously? Not even a nap?)

In effect, few star players have been as divisive among fans; depending on what kind of basketball fan you ask, you might have a hard time believing he was a superstar throughout his prime.

From 2005-06 to 2014-15 — Anthony’s prime, with a little give-or-take — advanced models and their biggest supporters will tell you that because Anthony ranked No. 71 among players in box plus-minus (and behind a half-dozen former teammates) means his superstar run was more synthetic than we’ve been led to believe.

Others, the traditional, eye-test purists, saw the hand Anthony was dealt. Whereas the rest of his superstar draft class ran the table with draw fours and reverses, Anthony chose to run with average cards and a skip here and there.

By the time Anthony took off a New York jersey for the final time, he’d played with 72 different teammates over a six-and-a-half season span.

Here’s some math for you: that’s an average of over 11 teammates per season.

This is the equivalent to telling LeBron James, “That’s a pretty good team you have there. But next season, we’re re-tooling, and that means we’re going to do away with Anthony Davis. And Kyle Kuzma. And Dwight Howard. Oh, and we might have to take Danny Green and Rajon Rondo off your hands. And maybe a few more players after that. But, no biggie, though.”

The moral of the story is that if you care enough, there’s some sort of numerical conclusion you’ve come to as it relates to the 10-time All-Star.

As Anthony prepares to return to two former “homes” this week during his appreciation — but “not-no-damn farewell tour” —  of a season, here’s the number that sticks out to me.

In regards to Anthony, and the idea that his jersey should be retired as both a Denver Nuggets and a New York Knick, that “13” stands for two things.

From 2000-12, the New York Knicks went without a single postseason series victory. Throughout that span, the NBA’s most valuable franchise blitzed its way through nine different head coaches, more presumed “franchise saviors” than we can count on two hands and a 357-563 record (and just a 3-15 record in the playoffs, if you aren’t laughing yet).

From 1990-2002, the Denver Nuggets were a hopeless bunch. Though their failures weren’t as top-fold as the Knicks, they were quietly just as incompetent, save for Dikembe Mutombo and Mahmoud Abdul-Rauf’s surprise in 1994.

As a brief recap, we saw: four seasons of 60 or more losses, including a 70-loss season in 1997-98 and a three-season stretch in which they combined to win just 46 games (crazy to think, three seasons worth of a team might not have been enough to make the playoffs in the Western Conference in most years).

And then came Carmelo Anthony. Parts of this almost doesn’t seem authentic. The Nuggets have played in 3,517 games and have become subplots to the stories of 10 Naismith Basketball Hall of Famers. But of all the postseasons the franchise has been in, Denver’s 2008-09 run with Anthony as its star not only lasted the longest (16 games), but also produced the best win percentage (.625).

Through the life of his reign in Denver, Anthony played in arguably the deepest talent crop in Western Conference history. And never once did his team miss the postseason.

But just like most things in life, the Denver Nuggets have an excuse and the New York Knicks do not. Whereas the No. 15 is currently being donned by another brilliant, offensive superstar in Nikola Jokic in Denver, the New York Knicks have all of a sudden become uncharacteristically quiet about even the idea of retiring the No. 7 in the rafters someday.

In fact, the only Knicks player to play post-1980 and have his jersey retired is Patrick Ewing.

It feels like a broken record to say this (did somebody say broken records? Because Carmelo Anthony has tons of them. The single-game scoring record. The closest a Knick came to winning a Most Valuable Player award in 35 years, etc), but we’ve seen this movie before.

There’s a whole lot of things missing at Madison Square Garden and I’m not just referring to jump shots.

When you look up at the rafters, you’ll notice another generational, vibe-altering, class-of-his-own scorer having been unfairly omitted. Somehow, we can sit here in 2020 and wonder: why hasn’t Bernard King’s No. 30 been retired yet? And better yet, why have four players since then been able to wear it?

There’s an old quote that figures to hold true in this scenario: you either die a hero or you live long enough to see yourself become the villain. In considering the cases of both Anthony and King, they were unfortunately dealt the latter. And just as similar, neither quit, but rather they were quit on. 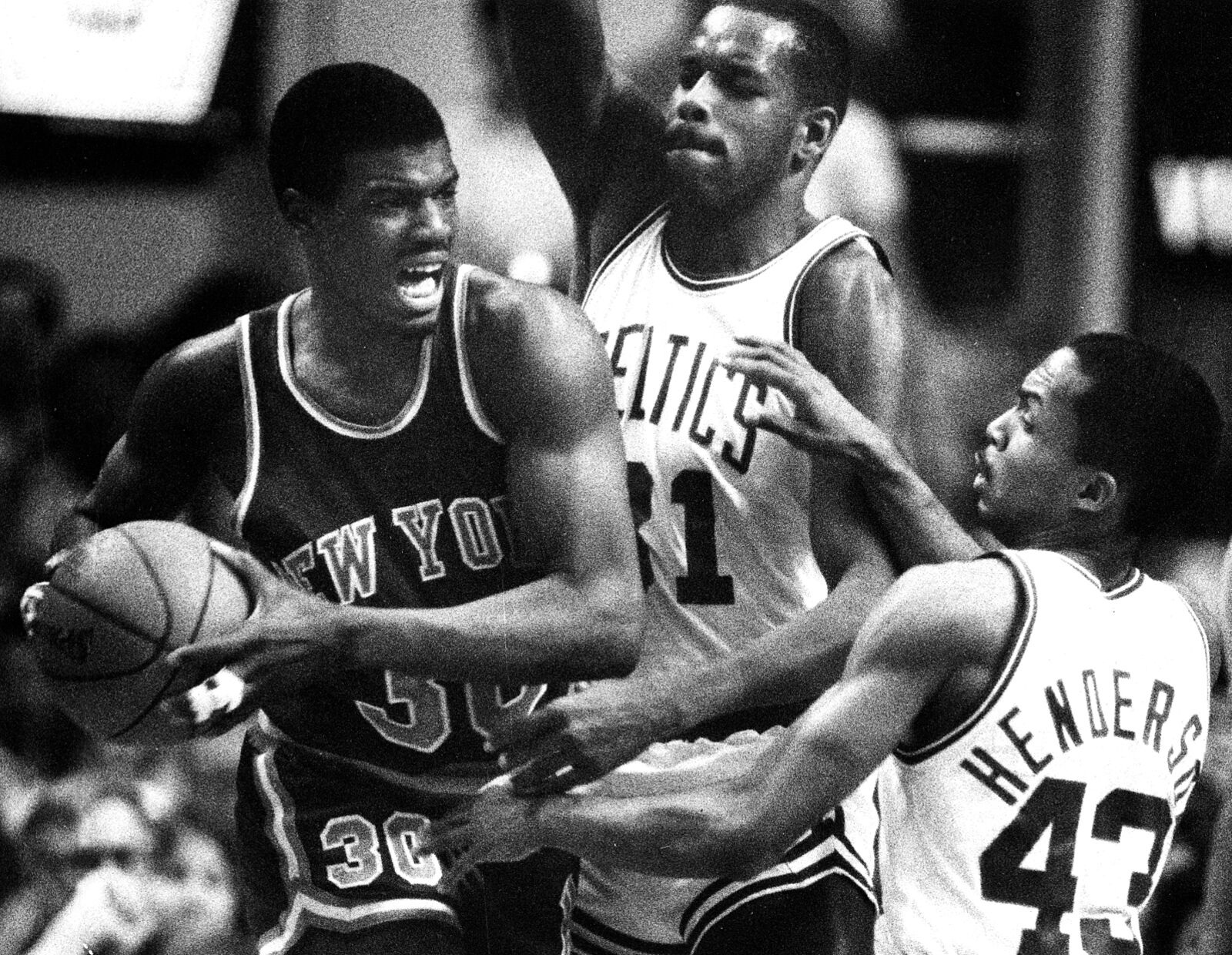 The parallels between Carmelo Anthony and Bernard King are eerie. (Photo by John Tlumacki/The Boston Globe via Getty Images)

To give a brief synopsis of King’s situation in New York: two seasons after defeating Isiah Thomas’ Pistons, taking Larry Bird’s Celtics to a seventh game and guiding the Knicks to their most complete season since 1973-74, King suffered a torn ACL, torn knee cartilage and a broken left leg.

Those are injuries that, to this point, no player had ever returned from, which King vouches for in his 2017 autobiography Game Face.

King says he remembers asking three prominent surgeons if they could get him back to his All-Star form, to which they told him he would never play again and even his ability to walk normally again could only come into fruition by surgery.

Well, King did indeed walk again, uncharted waters even, as he underwent what some would call the first surgery and rehab of its time. Soon, he was back in close-to-peak form. History also tells us that King went on to become an All-Star starter again, but as a Washington Bullet.

The New York Knicks were unwilling to walk through the unknown with the star that resurrected their franchise. They renounced his rights.

These days, we remember the NBA in the 1970s and 1980s for something more explicit. Players smoked, sniffed and injected their way out of the league. But what King injected into New York — energy, excitement, and a must-watch showcase night-after-night — deserves to be remembered, too.

The parallels between Anthony and King are eerily similar.

Their ability to put on a show for the fans, the amalgam of ways to score and produce, regardless of the team’s record, the whereabouts of the other four players on the floor that night, and now, the lack of appreciation from a front office that ends on bad terms with four of every five stars it attains today and then wonders why star players aren’t coming there tomorrow.

And maybe for some that’s not enough. It’s of great irony that in today’s era, computer scientists sit in seats and create formulas and models that trump every discussion, but never take into account the human impact — the ability to also put butts into seats and give an entire city something to buzz about.

The year before Anthony’s arrival in Denver, the Nuggets ranked No. 25 in attendance. One year later, they jumped to No. 12 — a borderline nirvana for small-market teams. Seriously, there were more fans in Denver, going to see the young, corn-rowed (was that a word before just now!?) offensive juggernaut than there were for a 61-win Indiana Pacers team.

Seriously, why would you not want to be in the stands when the Indiana ‘freakin Pacers are in town? Give me one reason. OK, two.

And as for Anthony and King, neither won a championship in New York, but you’d be lying if you said the words “championship contention” and “New York” weren’t at least applicable within the same sentence. And no, this isn’t just me referring to those times where they were 1-0.

Some would offer that Anthony inveigled his way into this level of cultural impact — that YouTube highlights, NBA LIVE 2005 covers and offensive brilliance means little in regards to his actual on-court value. But answer this: if Anthony’s cultural impact and put-butt-in-seat ability aren’t enough to get his jersey in the rafters when added to his on-court production….

And this comes with all due respect. Bradley was once described as “the player (James Naismith envisioned) when he created the game of basketball. He was an instrumental piece of a championship team in New York. But when you Google his name, it the first thing he isn’t recognized for is his basketball acumen. It’s his three terms as a Democratic U.S. Senator.

McGuire, with averages of 8.0 points, 4.2 rebounds, and 5.7 assists, was known as one of the league’s first great passers. Of the Knicks’ first 64 seasons, he spent 53 with them.

At the end of the day, no superstar is putting that onus on their shoulders the way Anthony did. If they don’t show their appreciation now, will we be alive to see another Knicks’ jersey retirement?

Maybe they don’t lead the league in win shares or true shooting percentage. But in terms of “where were you went he did this” moments? They’re in the cream of the crop. Many of the league’s most admired players aren’t in the rafters because of what they did on-court.  But leaving an imprint that cannot be matched upon a generation feels just as sincere.

The question itself first picked up steam a few weeks ago when Anthony was asked about it in a press conference. To my absolutely-not-surprise, legions of fans asked the question: “Why? What did he do here?”

Much of the negative, prisoner of the moment connotation comes from the Knicks’ production in the Phil Jackson era.

It’s easy to forget these days — before Jackson and his 11 rings came into town, Anthony and the Knicks won games at a .555 rate (or, a 45-win per season average). Once Jackson took over, they went 80-166 (a 26-win average) and public criticism of his players effectively killed a culture already on life support.

If given only one sentence to argue the claim, I’d contest that no superstar in our history (excluding maybe LeBron James or Allen Iverson) could have coaxed even a 30-win season out of this group. Say you’re of the kind that believes Carmelo Anthony’s run in New York was of little worth — that thousands of buckets and imponderable amounts of positive buzz centered around the basketball’s Mecca aren’t enough to make up for fractured relationships, all the ball stopping, the assets lost to gain those efficacious spirits.

Well, the trade deadline is Feb. 6. As we come to the close of this article, why not make ourselves our own blockbuster deal?

History gets back Carmelo Anthony’s run in New York and in return, a thankless fan base and front office gets to operate their franchise through Amar’e Stoudemire — with the hope that over his final 410 games, injuries don’t strip 158 of them away. Sounds about fair, no?

It’s thoughts like these that bring me to a hope that Anthony doesn’t join the likes of Tracy McGrady; of Ray Allen; of Paul George. Guys that have brought home to so many franchises, and will have little to nothing to show for it when all is said and done. For Denver and New York, let’s hope they end the reticence on this subject.

Next: NBA’s 20 most promising young duos

To show their acknowledgement for Carmelo Anthony, the two franchises should meet him halfway. Right in the middle. Right there in the mid-range, if you will.

Does Zion have a chance at Rookie of the Year?

Looking back at how things change with hindsight