TUCSON, Ariz. – Mikayla Pivec scored the game-winning basket with 1.4 seconds on the clock to lift No. 3 Oregon State to a 63-61 win over No. 18 Arizona Friday evening in Tucson, Ariz.

“We knew Arizona was going to come out with a great fight,” said Oregon State head coach Scott Rueck. “That’s why they have been able to do everything they have done this year. I thought we executed well, but they did a good job of making things tough for us. Mikayla has a knack for making big plays in big moments, and that’s what she did today. She made a big time shot for us in a big moment. This was a great team win for us.”

The Beavers’ 15-straight victories is the longest winning streak in program history, and Oregon State joins UCLA as the only remaining undefeated teams in the nation. OSU also snapped Arizona’s streak of 13-straight home wins. The Wildcats’ last two home losses have come to Oregon State.

The Beavers shot 43.2 percent from the floor, while the Wildcats shot 41 percent. OSU also held a 38-27 advantage on the boards.

Oregon State got off to a strong start, scoring the first seven points of the game on its way to a 13-9 lead at the game’s first media break. The Beavers headed to the second quarter in front 19-15.

Arizona responded, going in front 26-22, but Oregon State exploded for an 8-0 run spanning just over a minute to retake the advantage 30-26. The Beavers headed to the locker room leading 36-30.

Oregon State extended the advantage to double-figures four minutes into the second half. Arizona responded, using a 10-0 run to cut an 11-point deficit to one. Tudor converted on a four-point play to end the third quarter, as the Beavers headed to the closing frame up 49-44.

OSU quickly extended the advantage to nine in the fourth, but the Wildcats again responded, cutting the edge to three. Arizona retook the lead at 60-59 with three minutes to play, but Oregon State was able to go back in front from the stripe on the next possession.

With 11 seconds left and the game tied, Pivec drove into the paint and finished through contact with under two seconds left. Slocum played excellent defense in the closing moments to contest Arizona’s final shot, securing the win for Oregon State.

The Beavers will remain in Arizona this weekend, as they head to Tempe to take on Arizona State on Sunday.

Through the first two months of the 2019-20 women’s basketball season, these are the five best players at every position.

These are the best men’s basketball conference matchups this season. 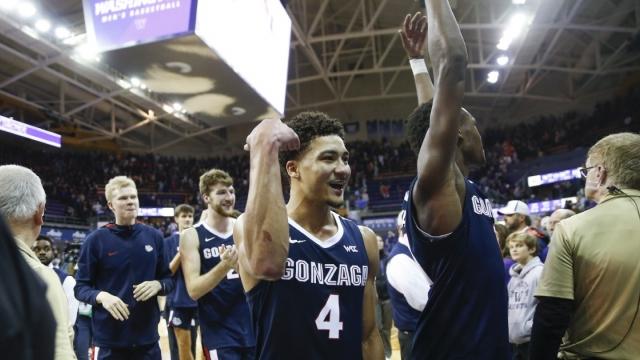 No. 6 Gonzaga at No. 15 Arizona: Time, TV channel, preview, prediction

Two of the best teams on the West Coast will square off on Saturday when No. 15 Arizona hosts No. 6 Gonzaga.

Here’s a starting five of the best scorers, rebounders and stat-sheet stuffers in DII women’s basketball