While Northwest Missouri State’s 46-game winning streak came to an end Saturday, Dec. 7 to Central Missouri in upset fashion, it doesn’t make it any less impressive. The Bearcats started the season on fire, and are still looking like one of the teams to beat in the 2019-20 season.

Let’s see how the Northwest Missouri State streak matches up in college basketball history and a look at how we got here.

In order for Northwest Missouri State to have tied Winona State’s record of 57 consecutive wins, the Bearcats would have had to play perfectly through their Jan. 25 showdown with Fort Hays State.

PLAYER OF THE YEAR WATCHLIST: 15 players to keep your eyes on

Northwest Missouri State win streak: How we got here

The Bearcats’ last loss was March 10, 2018, when they fell 60-50 to Minnesota State in the first round of the NCAA DII tournament. It’s been all Ws since.

DII vs. DI: How Northwest Missouri nearly beat No. 4 Duke in college basketball

Northwest Missouri State opened 2018 at the Small College Basketball Hall of Fame Classic with a bunch of new faces in the starting lineup and took down the 2018 runners-up Northern State and defending champion Ferris State in two days time.

That started a trend. With the Bearcats’ most recent sweep in the SCB Hall of Fame Classic — both against top 25 competition — they have won 34 straight games on neutral courts dating back to the 2015-16 season, including all three last season in Evansville, Indiana, to capture their second national championship in three years.

Some other numbers, you ask? Entering the 2019-20 season, Northwest Missouri State has won 23-consecutive Mid-America Intercollegiate Athletics Association games, 17 straight at home and 15 on the road. The Bearcats hope those numbers continue to grow.

Here was how the Bearcats started their run at history.

Wayne Cavadi has covered all things Division II sports for NCAA.com since 2016. His work has appeared on Bleacher Report, MLB.com, AJC.com, SB Nation and FoxSports.com and in publications like The Advocate and Lindy’s Sports. Follow him on Twitter at @UofDWayne. 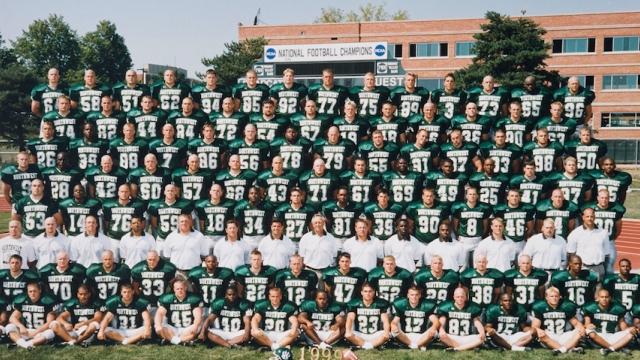 Northwest Missouri State and Carson-Newman battled in a memorable DII football championship game that wound up one of the most exciting college football contests ever played.

This is the first DII men’s college basketball Power 10 of the 2019 season. Undefeated Northwest Missouri State leads the pack, winners of its last 44 games in a row.

There have been 18 DII football programs that have won 24 or more consecutive games. Here’s a look at the longest of those streaks.

Baylor, Duke, Butler and Gonzaga are the No. 1 seeds in Andy Katz’s first NCAA bracket projection of 2020

Clemson’s Aamir Simms on upsetting Duke: ‘Just an unbelievable moment none of us will ever forget’